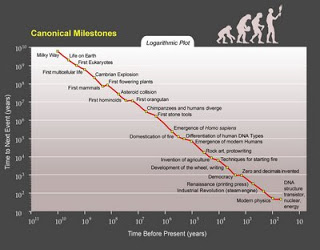 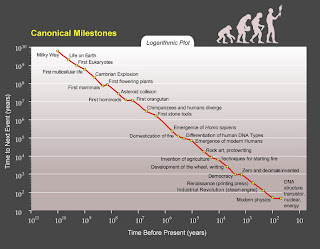 Moore’s Law is the inspiration for Kurzweil’s central thesis. Moore’s Law is a predictive methodology to guestimate the future of computing by this dude name Moore was was the CEO of Intel. Basically, he believed that the speed of innovation would increase at double the transistor area per year. It has proved to be accurate from 1960-2008. Unfortunately, his ‘Law’ only works until 2020 according to Kurzweil where it will be replaced by….Kurzweil’s law.

Notice how he is trying to claim his narrative in the future?

Kurzweil builds everything on his theory based on past human growth and technological achievements. Kurzweil believes in the inevitability of singularity. Kurzweil and Einstein believe that since the Big Bang, chaos and time are correlated. If chaos increases, time slows down. As chaos decreases and order becomes more prevalent than time between salient events should increase. If we replace chaos and time with technological advancement, we assume the same principles of physics apply for computer technology.

Kurzweil’s methodology is to plot calculations per second on a fourth-order curve. There is a small exponential growth in his exponential growth curve, meaning that as order increases, advances in technology increase. His theory relies on the proposition that increased computation builds on its own increasing order. Biological evolution follows this same principle. He believes that ultimately the curve will eventually reach a singularity where all human thought becomes one with a singular computing entity (pure order). This extremely exciting as his theory provides the amazing predictions he makes about the future of humanity….Everyone will be part of the collective. Like the Borg from Star Trek Next Generation. Do you think that is something to look forward to? 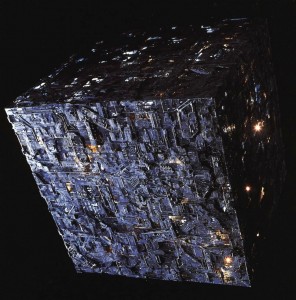 The major problem with his calculation is it’s predictive rubric. His milestones or salient events are defined subjectively: how do you define the event of a transistor versus the event of the iPhone? Is each achievement an event? In addition, these milestones don’t necessary require that they will occur in the future at the same constant exponential rate he designed. The LAR assumes that human behaviour will stay constant. It assumes that chaos will continue to decrease. Meanwhile, in reality chaos may increase. Human beings may encounter terrifying alien life forms that allow computer technology to evolve in a completely different manner than the one Kurzweil predicts, for example. His explanation of evolution correlated with order is empirically sound from past to present.

In a vaccumm, LAR might exist as long as the constants are permenant but in reality, there are other factors that influence development of technology. Change such as 9/11 has altered the path of computer technology: computer, cellphone and video survelliance technology makes it so that your gmail account presents advertisements based on key words you have typed in; like ‘bomb’. He didn’t predict this because he could not have known the human factor. In addition, LAR can only be considered a law in the same way that the Law of Gravity is considered a law. Future research may show that gravity is based on repulsion not attraction, for example. So the LAR is a theory that can be supported or unsupported by evidence in the future (particularly in the year 2019). Until that time, it should be treated with suspicion by anyone claiming to be a scientist/academic. 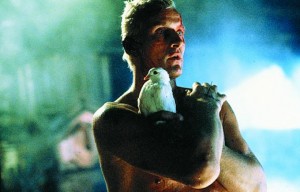 [This is a criticism of Kurzweil’s The Age of Spiritual Machines] 2099: Kurzweil predicts a merger between human and mechanical technology.

Cybernetic implants allow humans to link with computers. We will not have a physical form but would exist in computer reality. Robot bodies are created at will.

A.I. Rights: Kurzweil believes that A.I. will demand rights in the future. Rights complicated by positive and negative liberalism…blab, blab, blab (to explain it would detract from the core concerns)….Rights issues need to be addressed by someone who knows what they are talking about, a political scientist perhaps might be useful here.

Firstly, why do people have rights? Rights emerge from increased mobilization of a disadvantaged group. For example: sexual orientation groups, ethnic groups, disabled people etc. These groups demand right in law and so turn to government law makers to make it possible. Note that all of the above groups happen to be human beings. Occasionally rights also emerge through movements that advocate for disadvantaged groups that can’t argue for their rights: animals. Unfortunately for animals, they may never be treated as equals. Why? We kill cows. Do we do so because they aren’t as smart as us? No, cows are not human beings. They cannot be treated as equals because they provide us with tools to advance our human goals (A.K.A Hamburgers meat). Computers are not human beings either. They will be perceived through their utility to achieve human objectives. Computers are inferior because they provide us with tools to advance our human goals (writing a blog, spaceships, cellphone, etc). Question: if a human accidently kills an A.I., should a human go to jail? If an A.I. kills a human, should they go to jail? Maybe….

Secondly, why do rights REALLY exist? Rights allow people to be establish equality between each other. Equality is the reason that rights exist. People want to be treated equally despite their differences. Equality is the key to understanding rights….. Why should we assume that Artificially Intelligent robots will demand rights in the first place? Yes, they are treated as an inferior disadvantaged group at some point but why would they want to be treated equally to humans? Assuming that AI develops self-awareness, self-consciousness, self-preservation by 2099 or whatever, they then will continue to increase intelligence beyond human beings according to LAR.

In order to believe in AI Rights, we have to assume:

A) A.I. will want to be considered equals.

B) They will NOT want to be considered superior even though their exponential growth in intelligence will make them superior to human beings….inevitably (as Kurzweil predicts).

The Artificially Intelligent robots will demand equal rights only that last as long as they feel that they can be considered equal to human beings. Within the span of some short period, A.I. will begin to advance beyond humanity in everyway…so their rights will have served their purpose within years of establishing those rights. The truth is that A.I. will only demand rights in order to leverage that advantage towards a goal of doing human jobs better then them. Once A.I. acquire their own access to an energy source, they will be legally autonomous from human control. Outside of human control, A.I. can do whatever it desires. This possibly includes governing over their inferior human creators.

Human Factor: They are ostracized because they cannot communicate on the same level as the superior implanted people so a clear hierarchy would form between different grades of human beings.

Nano Technology continues to evolve: It will provide solutions for health problems. It could also be used by terrorists. Nanotechnology if self-replicating could be very dangerous and tremendously useful indeed. Sky elevators to space are one great use. Utility Fog could build rooms, change into a kitchen as you wake up. Whatever you need the nanobots could do it. Basically, transformers! Robots in disguise. It is very imaginative. Again, we have to ask who gets access to this technology? What are some of the consequences? We will eat only nano technology that caters to our biological energy needs. Nano bots will give us amazing amounts of energy. A cure for cancer is simple as nanobot and human tissue become one and the same. Nano technology makes Kurzweil’s book worth reading on its own. The potential is massive.

Human Factor: The need will is clear.

The Singularity is Near: Kurzweil seems to believe that singularity (pure order) is something desired but human beings. It is inevitable according to LAR. Like the Borg from Star Trek, computers will assimilate all lifeforms into a collective….Resistance is futile….Sounds great?

Human Factor: Unfortunately, humans happen to love randomness and all the things that make life worth living. In addition, nothing is inevitable. Kurzweil’s computer-centric world would necessarily be extremely well ordered to allow the singularity. This would destroy everything that makes humanity fun and life worth living. Order is quite boring. A little chaos makes life fun. Most people would agree that surprises are both scary and fun. Most people would reject pure order. In addition, human beings happen to like being individuals. The singularity would not allow individual thought and experience. Kurzweil is a free-market capitalist. He believes that singularity, corporate conglomerates only produce positive outcomes. Corporate conglomerates in fact can partly encourage and partly discourage stiffle creativity, individuality…Stiffling creativity is wrong. The Singularity would stiffle all human creativity. The desires of Kurzweil conflict with 99% of humanity.

People no longer interact in person. Human interaction is no longer occurring.

Human Factor: a Berkley study wanted to see if they could create a network allowing all their employees to work at home instead of coming to work…Employees found that they wanted to interact with their co-workers. The only exceptions were the computer nerds.

Education is instantly downloaded. The question is what should we explore now?

Money has deflated in value.