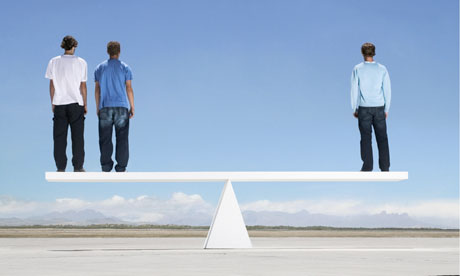 Equality is a theory best expressed by the enlightenment thinkers but as a theory, it fails to be realized effectively in practical form. In this article, the concept of equality is channelled to explore Kurt Vonnegut’s Harrison Bergeron, Bernard Williams’ The Idea of Equality, and Barbara Ehrenreich’s Nickeled and Dimed. The evidence will suggest that the concept of equality should not be the attempt to combat and equalize human uniqueness nor should inequality in economic, political and social spheres be supported. The theory that all humans are equal is flawed in practice since people are unique and unavoidably unequal in terms of social, cognitive, economic and political terms. Conversely, individuals should be treated equally regardless, as much as practically possible, in areas of respect, rights, and opportunities, in order to achieve maximum social mobility and thus create a meritocratic society. 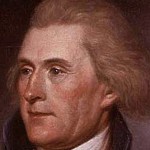 One of the basic concepts (re)developed in the 18th Century is the idea of equality. Its basic idea, summed up in The Declaration of Independence by Thomas Jefferson, was that “all men are created equal” (Perspectives, 381) in the eyes of God. However, in truth, theory fails to effectively be transferred into practice. Ironically, in this case, Thomas Jefferson was both a liberal theorist and a slave-owner. In the historical context of the time, he was greatly influenced by both liberalism and the unavoidable greed involved in capitalism. Of course, today slavery has been abolished but inequalities still remain due to capitalism and economic oppression. It is this conflict between capitalism and the basic liberal philosophy of equality that has plagued the modern world to this day and capitalism which attempts to measure value/price/cost, in part, is at the root of inequality.

In reality, “to say that all men are equal…is a patent falsehood” (Williams, 465). The theory of equality of all men, later women and non-whites, is unfortunately simply a theory that has been entrenched in law but misappropriated in practice. In the current world ,equality is elusive and impossible to achieve. Interestingly enough, even if it were fully achieved, however, it would be undesirable. 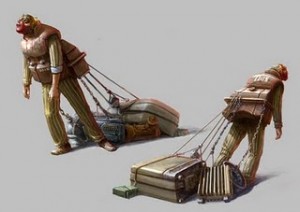 An excellent example of the theory of equality in practice is shown through Kurt Vonnegut’s short story, Harrison Bergeron. The premise of the story is that a government has coerced all people to be equalized. Basic civil rights are completely abused as the characters of George and Hazel are mentally and physically repressed. By making sharp noises disrupting thought, the “handicap radio…Makes [them] all more equal” (Vonnegut, 6). In the end, their son is killed by the Handicapper General while attempting to break through the mould of mediocre equality.

What Vonnegut’s tale helps illustrate is that the actual implementation of equality, in its purest form, completely fails equal human respect, rights and opportunity. As revealed by the story, the government has forcibly made life completely incapacitating and void of uniqueness. The failure of the theory of equality is apparent, “Nobody [is] smarter. Nobody better looking. Nobody stronger or quicker” (Vonnegut, 6), there is only equally mediocre individuals fulfilling the concept that all humans are equal. This is clearly undesirable and yet it is the embodiment of the theory of equality in practise, where all humans are equalized. If human nature is bound in a theory that does not allow for proper human nature to grow, the theory both fails and is undesirable in practise. On a moral and rational standpoint actual equality is not a desirable theory. What needs to be realized, it is argued, is that full effectiveness of any theory of equality is not desired; instead improvement on society’s current understanding of equality must be made. 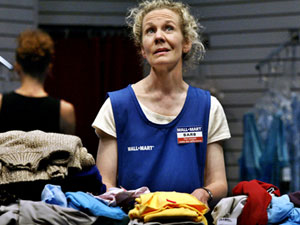 In the realistic and practical world, the disturbing reality of economic, social and political oppression is ubiquitous but for the purposes here, the reality can be looked at through Barbara Ehrenreich’s, Nickeled and Dimed. In this case, the theory of equality fails to protect the worker. The poor lower class suffer the difficulties of thank-less and virtually reward-less work, where the cost of living consumes most of their paycheques. Severe economic inequalities where “wages for people near the bottom of the labour market remain fairly flat, even ‘stagnant’” (Ehrenreich, 201) and political inequalities where Ehrenreich’s “purse could be searched by management at any time” (Enrenreich, 208), hinder the equality of an individual in the private job sector or the corporate sphere. Her basic civil rights seem to be obsolete according to the corporate agenda. She states the “Drug testing is another routine indignity…it is degrading to have to perform it at the command of some powerful other” (Ehrenreich, 209). Her social position is subordinate and there is no real respect for the minimum-wage worker. Ehrenreich’s book serves as an example of the inequality of respect, opportunity and rights of people who are judged to be unequal by economic, social, and political measurements. Clearly, there is much improvement on equality needed in society and her problems are best addressed by Williams’ analytical interpretations of the idea of equality.

Since equality has no weight when seen strictly as common humanity, according to Williams, it still exists that people should be equal in other, more practical, ways. Williams’ detailed argument emerges from the idea that humans should be equal in “political principles and aims” (465, Williams). It is argued, for overall happiness and harmony in the world, that different people should be treated equally regardless of finance, political or social arrangements. Naturally, individuals are not equal in their abilities or merit, after all, capitalistic economies, which are entrenched in most modern societies, place certain abilities or merits above others. Economics makes equality difficult because of its value system, which is antagonist to the goals of equality. People should be equal relatively speaking but cannot be perfectly or fully equal because it is undesirable.

Williams’ argument for equality of opportunity says that in order to have equality, one must exist under the same conditions. It could never be applied in its fullest form, neither would we seek it to be. Obviously, humans are not created equal in the sense that some people become Tennis Pros while others work at Sportsmart for a living. Disparity in opportunity is a natural result of scarcity in demand or supply of that opportunity. What should be expected of society and the government is an attempt to increase opportunity in a very real sense but not to the level of inhuman constructs. Healthcare, for example, should be transparent and equal for all people in society. In education, the same idea applies; education should be distributed amongst the people equally. Humans within the society are competitive by nature and only the government and the affluent can help save the poor. 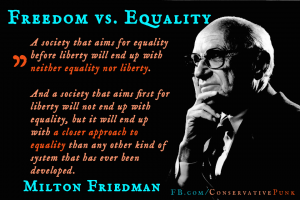 Although the theory of equality, in a literal sense, is not desirable, neither is the opposite where inequality affects ones ability to live happily. The statement “all humans are equal” implies the real notions of equal rights, an attempt to have equality of opportunity, and an attitude of equal respect and worth for all people. Following these guidelines, society would alleviate of the strain described in Nickeled and Dimed while avoiding the extremes of total equality in Vonnegut’s Harrison Bergeron, creating a harmony between complex equalities and equally complex people.