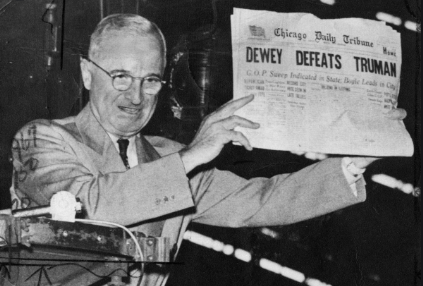 Never Believe You Are Beaten (Even If The Media Prints It!): (Presidential Race 1948) Israel is born, the bikini is unveiled, the jet breaks the sound barrier but Truman was going to lose according to Life Magazine to Dewey. Henry Wallace had split from the Democrats. Truman didn’t implement a cohesive campaign strategy: he took to a railway-styled campaign. Truman had big crowds. The people turned out to see Harry Truman. Truman attacked the Republican’s for their coldness. Truman believed that the Republicans were trying to steal from the poor. Truman called bankers “blood suckers of Wall Street”. Truman had solid attack lines. Dewey on the other hand was careful, cruel and controlled. Dewey didn’t want to make mistakes he wanted to ride his poll numbers which were much higher than Truman’s. Truman looked likely to lose despite Dewey’s lazy campaigning. Truman lashed out at the Republican congress, press, and the candidate. Truman did the best he knew how. Dewey had 49.5 to 44.5 for Truman at the end of the campaign. None of the press believed that Truman would win. On Election Night, Truman had the popular vote by 2 million votes but the farm vote had not come in until past 2am. At 10:14am the next morning, Dewey was defeated after many newspapers went to print. Truman was the miracle man. Not one of the polling organizations was accurate. Not one of the newspapers was accurate; the people had made fools of those “in the know”. This event was dubbed: “the great laughter of the public”. The press was dumbfounded. Gallup was completely embarrassed. The fault was not the polls were imperfect but that they were two weeks too late. On the last two weeks of the campaign Gallup did not take anymore polls. There was a massive shift in support in the last two weeks of the campaign. 2/3 of the population of Washington came to welcome Truman for his inauguration in 1948.