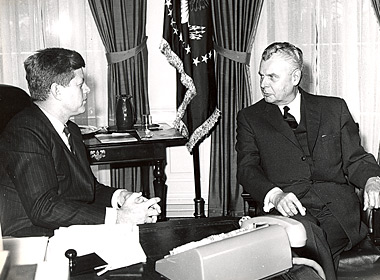 At issue in the taped conversation discussion below is a “stolen” confidential U.S. memo Kennedy left in a waste basket in during his 1961 visit to Ottawa. In the memo were scribbled notes that could be seen as condescending toward Canadian foreign policy positions. The degree to which Diefenbaker hyperbolised the offensiveness of the memo is still not clear as the recording indicates that there were exagerations but some level of accuracy. It’s widely known that Diefenbaker had leaked the document to the Canadian press. At any rate, Kennedy is recorded explaining that Dief is a ‘thief’ and that Diefenbaker was using the memo as a means of justifying his dislike of Kennedy to the general public in Canada.

Interesting how Kennedy is concerned about public relations with a non-US electorate and or it’s impact on public opinion of the Kennedy administration in Canada. And quite frankly, how incisive and focused Kennedy’s though process is during the taped discussion. Diefenbaker felt pressured to join the OAS which Kennedy agrees with in this recording, but other claims that were made regarding the memorandum were false according to Kennedy, unless of course Kennedy is actively lying in his own conversations. Learn more about the Rostow memorandum here.

The facts: Diefenbaker may have blamed his bad relationship with Kennedy on a memo but in reality, Kennedy was a young, brash silver-spooned politician while Diefenbaker was from humble roots and had strived for high office for decades before he became Prime Minister. Also, they were politically unaligned as Diefenbaker was a Conservative westerner and Kennedy was Democrat from New England. Famously, at a dinner in Ottawa in the early 60s, Kennedy was beside both Diefenbaker and former Prime Minister Pearson but opted to engage in an intimate far ranging conversation with the former Liberal Prime Minister at the total exclusion of Diefenbaker.  Diefenbaker tried to turn the discussion into a triangular dialogue but Kennedy kept talking exclusively with Pearson for the entire dinner and this behaviour continued even while the three of them sat to have cigars together. Kennedy was noted for once having said to Bobby Kennedy; “this Diefenbaker is such a bore, Bobby.” There are other details which seem a bit silly today but the most curious is that the two statesmen once had a dispute over who had caught the bigger fish….the conversation ended abruptly with Kennedy calling Diefenbaker a liar….