Union negotiations had the disadvantage of naturally discouraging a return to work: few would risk going back if a settlement seemed to be in the offing. Pit closures were assessed to see if it was possible to not close ‘any based on being beneficially developed’. Such a scenario would be a victory for Scargill. A sign of the militants’ frustration was an increase in violence against working miners and their families. There was a ‘Miner’s Wives Back to Work’ Campaign. There were legal battles against the NUM by two Yorkshire miners. There were fines placed on Scargill. The NUM visited Libya and made a personal appeal to Colonel Gaddafi for his support. Gaddafi made a donation to the NUM. There was an offer of a Christmas bonus. People began to return to work in November and December. Some miners were killed by the union. Thatcher makes no mention of police brutality.

NUM funds were being transferred abroad. The NUM board of trustees underwent legal action. In February the resumption of talks slowed the returning of workers. The NUM leadership were trying to evade the misery they had caused. Large numbers of miners began to head back to work. The strike finally had ended. British coal industry was not immune to economic forces, which applied elsewhere in both the public and private sectors. In spite of heavy investment, British coal has proved unable to compete on world markets and as a result the British cola industry. Marxists want to defy the laws of the land and the laws of economics…they failed as usual, according to Thatcher.

On Neil Kinnock
Became Labour Party Leader in October of 1983. He was a gifted orator but he was verbose, failed to master facts and technical arguments and lacked intellectual clarity. He used speeches designed to hide his Leftist union agenda. 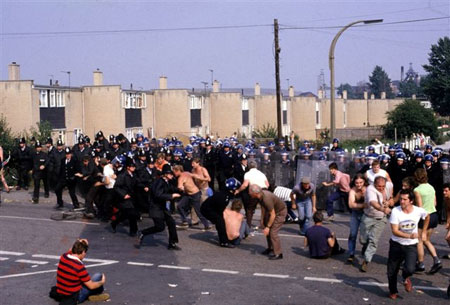 On Mr. Scargill’s Insurrection: Miner’s Strike 1984-85
The Labour Party’s local government and trade union would change. They accepted change. Mr. Scargill was publicly claiming that he did not recognize the Tory government as legitimate. He was prepared to lead those who might harm anyone who got in the way of the Left, including fellow miners and there families, the police, the courts, the rule of law and Parliament itself.

Coal mining was a special case in Britain because of the dependency of British industry on coal. During World War I there were 3 million coal miners. The industry diminished until finally the Labour government nationalized it. The industry continued to in decline and by the 1970s the coal mining industry had come to symbolize everything that was wrong with Britain, according to Thatcher. Scargill won the union presidency in 1981. Thatcher was preparing for a strike when she advised industries to stock up on coal between 1981-83. The NUM leadership distorted information constantly. Pits had to be closed as they were no longer economically viable but the NUM would not wear it. Scargill denied the economic case for closure. When asked if there was any level of loses he would tolerate: his reply was ‘as far as I am concerned, the loss is without limit’. The NUM propaganda talked of a hit list of coal mine closures from the government. A strike was finally agitated by Scargill.

The Yorkshire colliery of Cortonwood was closed triggering the strike on March 1st, 1984. Scargill bypassed the union constitution because it demanded a 55% majority for a national strike. He instead attempted to trigger strikes from each and every mine. Picket lines would travel around to intimidate others into joining the strike action. The flying pickets descended across the country. There was violent intimidation of pickling crossers. They needed to be protected using the rule of law. Mass picketing continued. The Yorkshire mine decided not to strike: this was a turning point. Thatcher sought to minimize the impact of the strike on industry to prevent the strike spreading by sympathy action and to keep coal stocks moving by road and rail. Britain has no national police force and financing the extra policy costs under a tripartite system was not easy. Mob violence can only be defeated if the police have the complete moral and practical support of government. The judiciary and government had to remain at arms length to maintain the principle of democracy in cases. Thatcher felt that men of violence went unpunished. The power industry was running low on coal. Scargill wanted a resolution. On principle, Thatcher needed to prevent the success of the union. This was paramount. 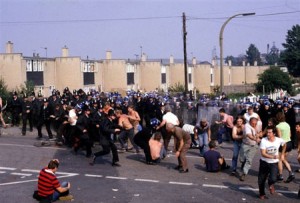 As the strike pushed on, union members began to lose faith in Scargill’s claims that the power stations would have to shut down within the first month. There was a general escalation of violence at this point. The violence at Orgreave was notable. Public sentiment back to see that nationalised industries were failing to follow the laws provided. Thatcher wanted to close more mines based on economic grounds but couldn’t noting that moderate miners would be pushed back into supporting strike action. Closing uneconomic mines was not happening. A dock strike occurred in July of 1984. More and more people were beginning to return to work in need of money.