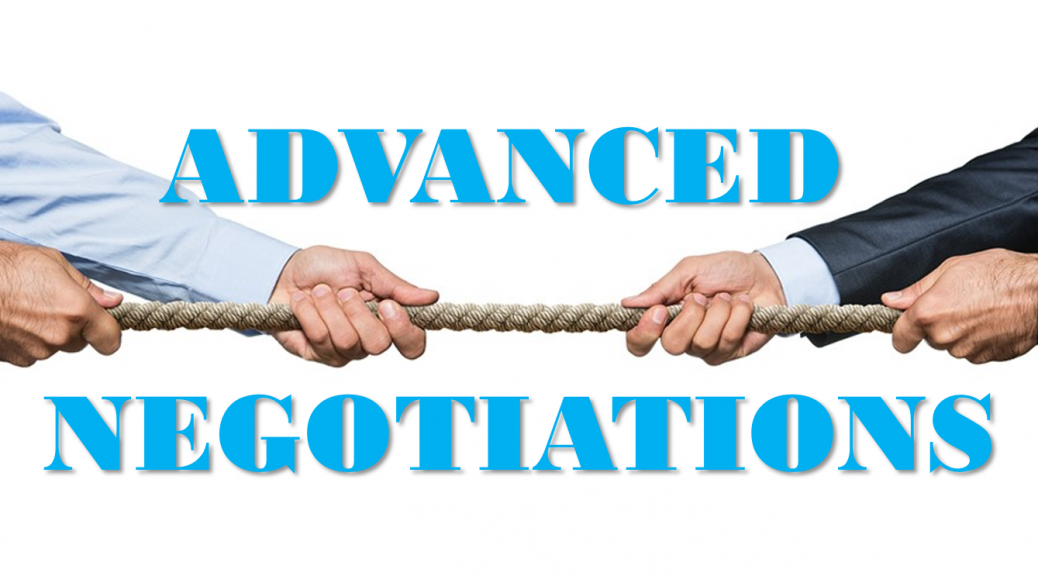 (Based on MBA notes)

The goals of every negotiation are the following:

In order to achieve Pareto efficiency, it is essential that both parties share their relative preferences of the issues discussed. This way, both parties will have a clear understanding of each other’s’ interests, thereby helping the parties come to an efficient solution.

Making concessions is a useful negotiation tactic because of the following reasons:

Concessions should be made in a strategic manner, in the following ways:

BATNA is defined as your Best Alternative to Negotiated Agreement. It is an alternative that you are guaranteed to receive in the case that negotiations fail.

BATNA can be viewed as a safety net, or a backup plan which can help in your approach towards negotiations. When a party knows what their BATNA is, it helps them think through various strategies to ensure that the outcome of negotiations is better than their BATNA.

Many a times, BATNA can be a source of power, and parties can use their strong BATNA’s to their advantage in negotiations.

BATNA’s can be used to calculate a party’s reservation price using the following formula:

The reservation price can then be used to calculate a party’s value claimed by using the formula:

Every party must ensure that they do everything to improve their BATNA before negotiations. BATNA’s can be strengthened by the following ways:

Once a party has an exact understanding of their BATNA, it is imperative that they do not lie to the other party during the course of the negotiations about their BATNA’s. This could make them legally liable for wrongdoing, and could negatively impact their reputation.

A mediator is a person who is seen as a neutral party in any negotiation or dispute, and whose purpose is to ensure that the parties come to an agreement. As opposed to an arbitrator, a mediator does not pass judgement and decide who is right or wrong as per the legalities of the situation.

A mediator can be used during the following situations:

Mediators are effective third parties when:

Compared to an arbitrator, a mediator has the following advantages:

The sole purpose of a mediator is to ensure that the parties reach an agreement. A mediator is involved in multiple rounds of negotiations with the parties involved. In each round of negotiations, the mediator identifies the interests of the parties, as well as any concerns and issues they might have. The mediator then utilizes this information to approach the opposing party and identify if the interests of the two parties are identical in any way. The mediator formulates solutions for interests that are identical, thereby resolving a few issues, and then works on the unresolved issues. During these multiple rounds of negotiations between the opposing parties, the mediator tries to reduce the number of unresolved issues and formulate the clauses of a possible agreement.

It is important to note that the mediator is also tasked with resolving the concerns of the both parties as well, through an integrative approach. The result of these multiple rounds of negotiations is to reduce the talking points to a bare minimum, thereby coming up with a final proposal which is voluntarily agreed upon by all parties.

A mediator curbs the parties’ overconfidence and gives them a reality check of the situation. By focusing on the interests, and not on the rights and powers, a mediator comes up with the most beneficial solution for both parties. This solution can entail a longer and sustainable working relationship of both the parties.

Since acceptance of the outcome is voluntary, there tends to be greater satisfaction of the solution.

The four considerations in making a WISE threat are given below:

Threats must only be made after careful consideration of the party’s interests, and not positions. This leads to the conclusion that the interests of both parties must be discussed during negotiations. In the situation that a threat is made based on the position of a party, it will most likely not be a credible threat, and would result in the company not willing to carry it out.

However, if the interests of the party are affected during negotiations, and if a party feels that its interests are not going to be met, then a party may make a WISE threat.

A threat must be precise in its clauses. i.e. A party must make a threat only if certain interests are not being served. Those interests must be detailed in the threat. In the absence of being exact in the threat, the opposing party might get a sense that the threat being made has no basis, and they might be pushed to taking actions that are mutually destructive.

The key strategic errors made by P-9 during their negotiations with Hormel are as follows:

P- 9: The labor union wanted the following issues to be met by Hormel

Hormel: The company had the following interests:

Based on this framework, it seems that Hormel had more power in this case. Since the company could transfer production as well as hire lower wage workers. P-9 did not consider all these factors when they decided to go on strike. They used arm wrestling tactics, which brought in ego and spite. By failing to calculate their BATNA, which was loss of employment, as opposed to Hormel’s BATNA, which was lower wage workers and moving production to different plants, P-9 made numerous errors in their decisions.

Due to the fact that P-9 did not calculate their BATNA effectively, it resulted in incorrect decision to go on strike, which ultimately resulted in the losing their jobs. Only a small percentage of employees got their jobs back.

P-9 moved from interests to rights, which resulted in Hormel moving to power. Since the company had much more power, it followed up on their word, and they ultimately won. In hindsight, P-9 should have focused more on their interests and sought a mediator to work with the company to resolve issues amicably.

Also, P-9 used a representative with a different interest as compared to their own. This non-alignment resulted in inefficient negotiations.

Cultural relativism suggests that when in Rome, do as the Romans do. Thus, the company is more willing to concede on issues that might not be acceptable in their own countries.

Ethical Imperialism suggests that when in Rome, do as you would do at home. In this case, the company is not willing to budge on ethical and legal matters, which could result in the company losing out on many business opportunities.

However, in legal and ethical pluralism, the company would be willing to accept only those issues that are not illegal in their own countries.

For example, many countries have laws that make it illegal to bribe foreign government officials, hire child workers, or partake in environmentally destructive activities.

In such cases, the company do not involve themselves in these businesses, but are willing to overlook other less important ethical issues.