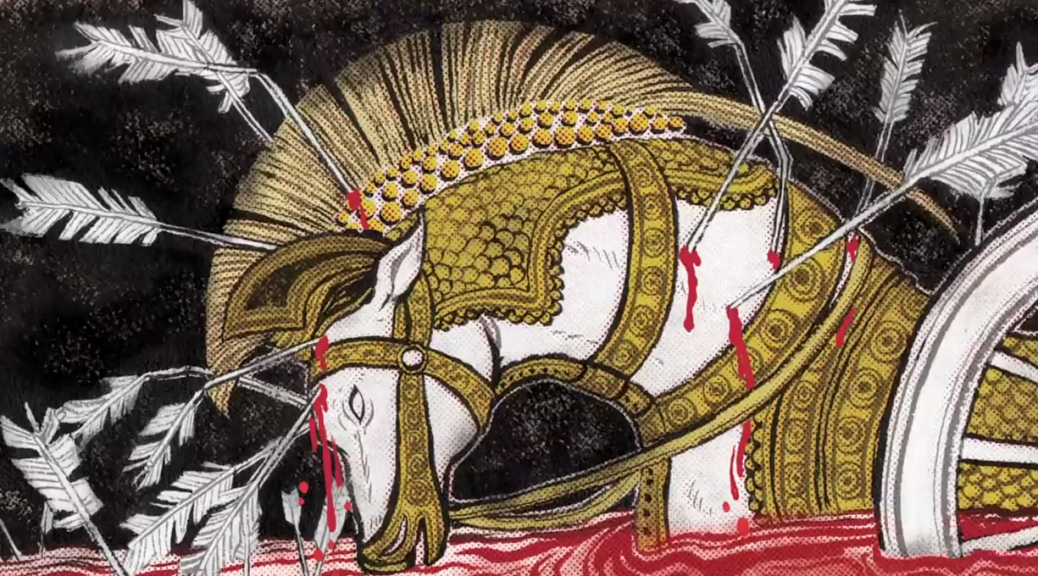 Steve: What I find most interesting about illustration is the direct relationship that you have with your audience.

Molly: I have always used my work to explore places and people that I wouldn’t have access to otherwise.

Sean: A lot of people sort of look down on comics and art, and, you know, I can understand why sometimes. But, for me, I just think it’s really challenging, and I think that’s what draws me to it.

Yuko: Drawing, it’s like asking kids who love to sing why they like singing. It was just part of me.

Steve: Illustrators to a great degree are interested in interpretation. They’re interested in a creative sensibility filtering through imagery. Lots of young and older illustrators are still using pen and ink, watercolor, wash, oil paint, acrylic, 3D, collage. There really is no medium that can’t be used for illustration.

At one time, the major markets for illustration were books, magazines, newspapers. And really for hundreds of years, being an illustrator meant working in those realms. Illustration did a lot of the work that photography does now. So that in print media if you saw portraits, if you saw war reportage, this would have been created by illustrators. As soon as photography started to take the place of illustration, it freed illustrators to go inside their own heads. They could start to deal with a personal symbolic or conceptual language. The role of the illustrator became much more than that just of expressing the ideas of a writer or an editor. So, in many ways, because of the changes that have happened in the field, there are greater challenges. Sometimes the budgets aren’t as big as they used to be. But on the other hand, there are opportunities available to illustrators in terms of self-expression and initiating their own projects that just didn’t exist 15, 20 years ago.

Yuko: Editorial illustration is basically you create illustrations for magazines and newspapers. Like if you open up a newspaper tomorrow and you see a lot of photos, where you see drawings with articles, that’s basically what I do. I’ve worked with “Time,” “ESPN,” “Fortune,” “New York Times,” “Wall Street Journal,” and “New Yorker.” As an illustrator, what I always keep in mind is if I come up with an idea that may look better as a photo, then my idea is not good. I kind of change my brain into becoming the biggest fan of the subject matter. Then hopefully it makes the viewer stop and want to read the article.

Japanese people look at my work and think it’s very American. And then Americans think my work is very Japanese. So, it’s kind of like half and half. Part of it is like a heavy influence from comics from 1970s and ’80s. The style that I accumulated, that manga style never went away. I always draw on paper. And then I finish the whole drawing and I scanned it in and finish all the coloring on Adobe Photoshop. So, it’s half digital half analog. Nowadays, there is more emphasis on the tablet media. And if the world is moving to digital media, illustrator has to adjust according to it. So, I’m trying to be cautiously optimistic.

Sean: When did comic art become seen as high art? I’d say we’re probably not there yet. When most people still associate us with The Avengers or The Hulk or something. They tend to think that that’s for kids. I did Joe the Barbarian and Hellblazer: City of Demons. I’m also working on some Batman stuff and I’ve been exclusive with DC Comics now for five or six years I’d say. I would say my style is a lot of black, a lot of noir. Very full, complex backgrounds. Not photorealistic at all. Comic artists, you’re sort of a caricature artist sometimes. Sometimes you’re doing perspectives, you’re using a lot of math to measure out backgrounds and whatnot as a plan for your storytelling. And I would say that there’s much more strict rules of storytelling. It should give it a good enough impression what’s happening before people even really read. Eighty percent of the market is probably superhero stuff. So I find myself writing a lot towards deeper subjects than just your typical, like, X-Men type stuff.

I wrote and drew this project called “Punk Rock Jesus.” It’s a story about a clone of Jesus who eventually decides he’s an atheist, and he starts fighting mass media with a punk band. For me, it was just like a nice way to sort of tackle religion, politics, science, and sort of a little bit of sci-fi in a fun way that didn’t really abandon anybody, but at least helped them think. In my eyes, I think, you draw these worlds and to do all this stuff, it’s so time consuming. Why would I waste 80 years of my life drawing people punching each other and wearing underwear outside of their tights and stuff? Just seems like there’s room for more.

Molly: What the internet has done is it’s exposed huge swaths of visual culture that were never prominent before. Now, because it’s incredibly competitive to be an illustrator, illustrators are making their style incredibly, incredibly specific to them because that’s the way that you become identifiable enough to get work. I have my roots in the New York burlesque scene and I’m very known for doing these portraits of these glamorous sequin-covered drag queens and dancers. I got really interested in doing work grounded in the Victorian era when I was in college. It’s cruel and it’s gorgeous. I just became really interested in subversion and class. And I’m incredibly inspired by journalists and activists.

I was one of the main poster artists for Occupy Wall Street. For a long time, there was a real idea of what activist art looked like. Activist art was red and black and had a lot of Soviet stuff. I wanted to show people that activism wasn’t just something for a certain type of predefined person, but was rather something that we should all be interested in. An illustrator now can’t just be a cool jack of all trades that does lovely, competent illustrations, because there aren’t enough slots anymore for lovely, competent illustrations. And so the illustrator kind of has to be a brand into himself. They have to be an interesting human being, and also put out cool, unique works of art for free. And then, after you’ve built enough goodwill with your audience, they’ll be interested in supporting you.

Yuko: Hopefully I finish up, and I feel that I finished something good. But also think my best image will come in the future.

Molly: What I love most about my art is using it to explore the world and to explore places in the world where other people haven’t gotten a chance to see.

Sean: Some of the most successful hits of comics, I think, go above and beyond some of our best illustrations.

Steve: One of the great things about illustration is the intimacy of the experience. It’s an experience that you really can’t get with any other image-based medium.