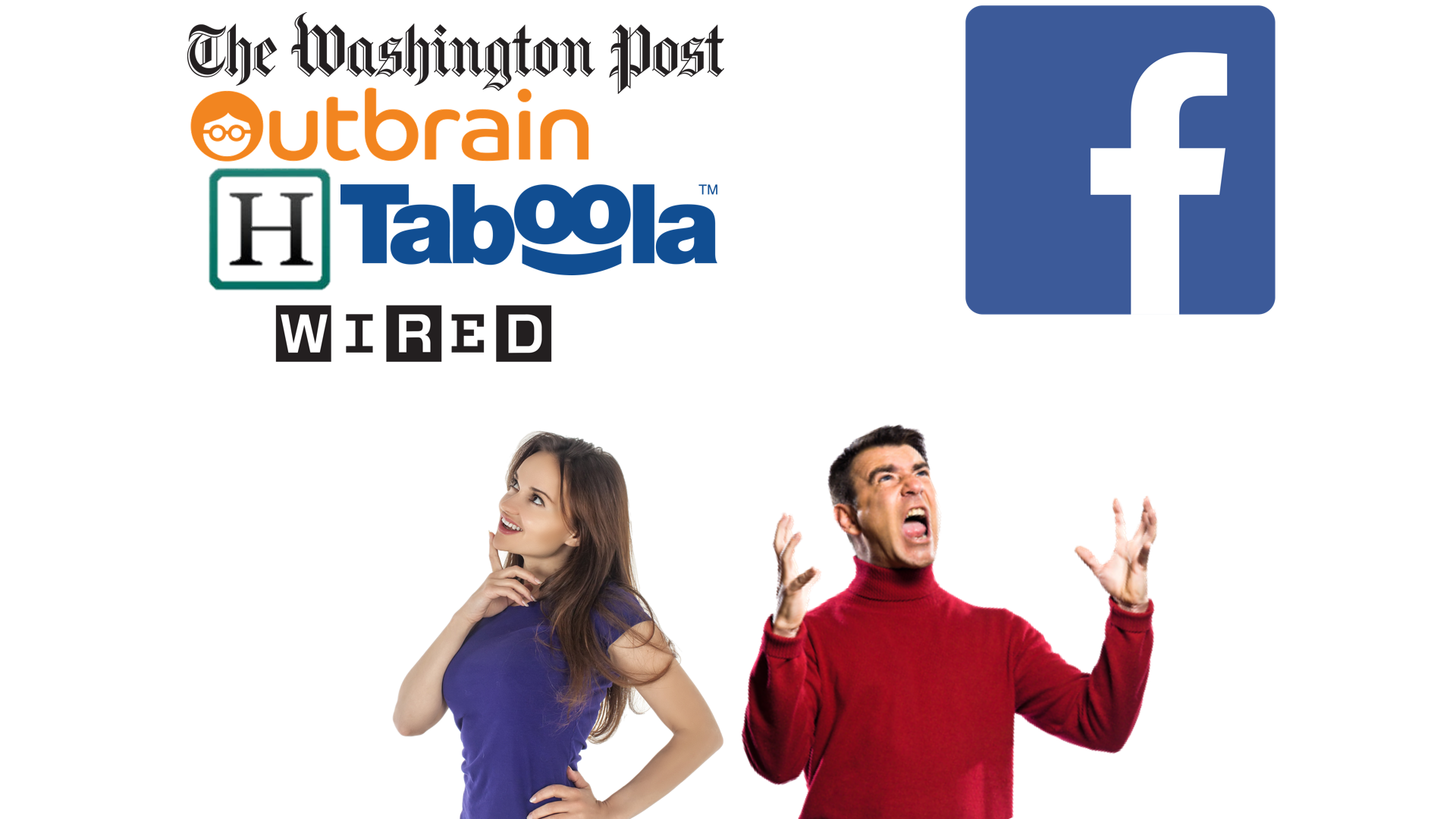 [Disclaimer this is a non-partisan publication]
And I am no Facebook apologist, but I thought it was worth raising awareness about the following:

[Transcript] Hey, I had to talk about this because I noticed, this morning, something really interesting, and I mean, more interesting than your standard cat video while you’re scrolling through Instagram. I was on Twitter and I clicked on a link to a really cool story called “Watch a Robot ‘Hen,’ Robot Chicken, with some chicks, flock of chicks.” And when you scroll to the bottom of this article, you’ll notice some moderately spooky or weird links from Outbrain and I think we need to look at Outbrain, but let me just show you on my phone what it looks like. 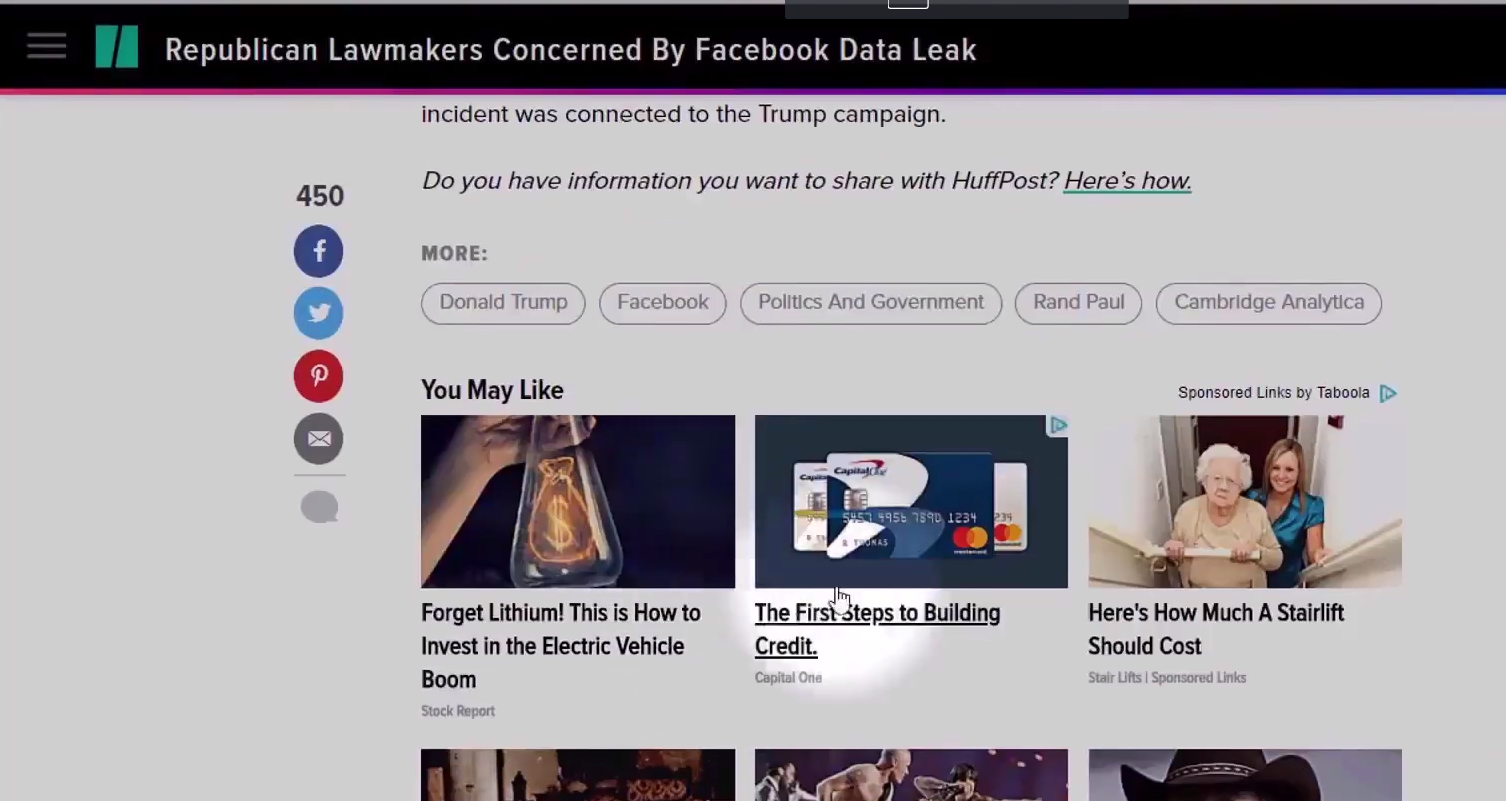 So, on my phone, I don’t know if you can see here, but the link at the bottom… Where’s my… Yeah, there’s my finger. The link at the bottom, one of them says, “Justin Trudeau about to legalize something controversial.” You click on that link, it takes you to this web page, which I will provide a link to in the video. You can see it right now probably. So I’m just voicing over what I see. Now, isn’t it kind of interesting this content is basically false or low-quality news? It’s not from the CNN website. If you look at the top URL, it’s not from CNN. It’s from something called insiderentertainment.com, and Outbrain is promoting it. At the bottom of the page, you can see what it’s really about. It’s about bingo. Fair play. I know that Wired is a reputable publisher and I know that Outbrain is really reputable as well, and so they post this in order to draw traffic to commercial interest. 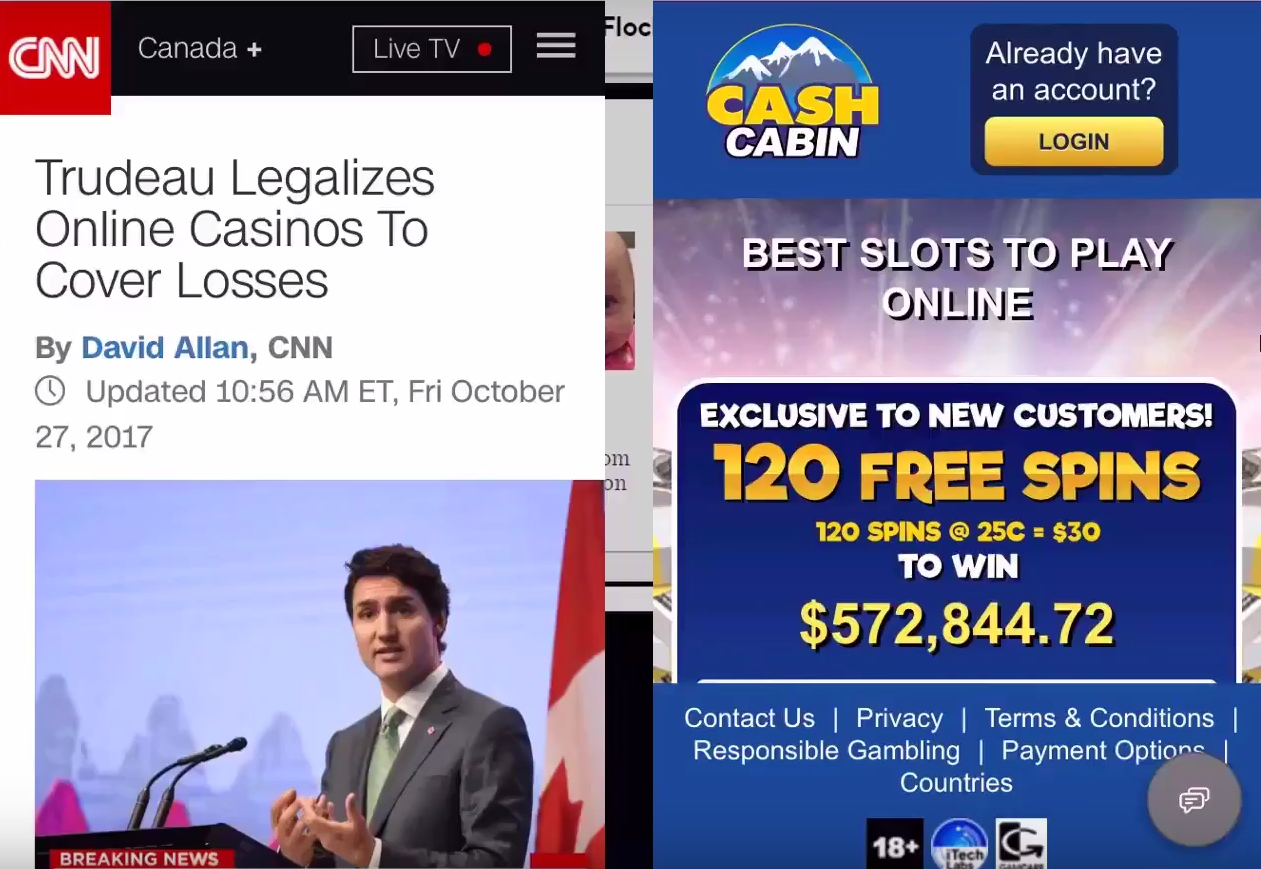 Now, imagine if this was actually not true (which it obviously is not true): Justin Trudeau has legalized gambling to cover costs. It’s, basically an attack on the current liberal government in Canada. So this is Outbrain directly on Wired magazine, a reputable technology publication, which has probably seen hard times. Why are they seeing hard times? Facebook is eroding their revenue. YouTube is eroding their revenue. PewDiePie is getting 2 million hits per video and “The Washington Post” is only getting 1 million hits. This isn’t fair. So, what do we need to do? We should be attacking Facebook as publications. We should be criticizing them in particular and there’s some legitimate arguments. There are very legitimate arguments regarding Facebook, but what’s being overlooked is this hilarious Outbrain and Taboola redirection network. 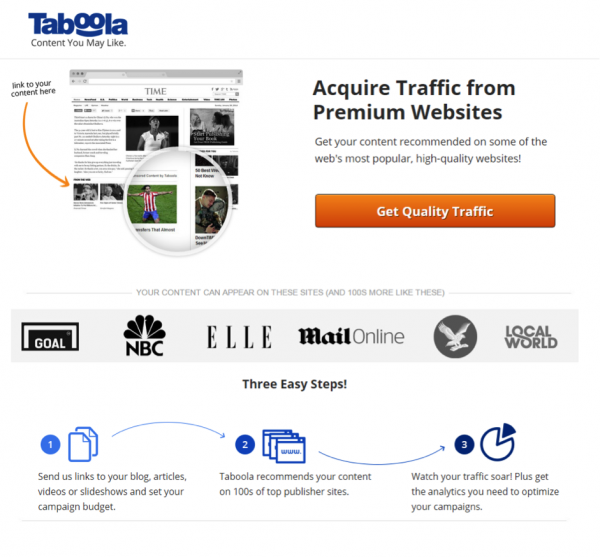 So what they do is, as you can see at the bottom of the article, there are sponsored stories from third parties. You click on it and it’s about driving traffic from Wired, as reputable site, to, you know, whatever you wanna sell these folks on the internet. Now, why would Wired work with them? Because ad revenue, they need the money. They’re desperate actually in many cases because people don’t wanna pay for what they feel is free even though 10 years ago, 20 years ago you’d have to buy Wired Magazine to read these great articles. So you’ve got Outbrain, they are reputable, they look at the content, they tie the articles to that content and boom, it’s great.

They have to vet their publishers, but it’s a chicken in the end. They need the publishers and at the same time, they need the suppliers, the actual companies that will publish articles to drive traffic. And it’s this weird situation where they might not necessarily vet and approve of every story and say, “Oh, valid. This is a legitimate story.” They’re happy to take the money and run, and Wired magazine is complicit in this. Now, another company that is even more famous for ingenuity for sure, for having that ability to create a click worthy the article is Taboola, and they’re based in Europe, Israel, in the US and they publish articles on places like “Huffington Post.” 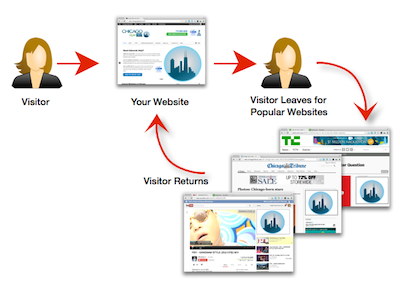 So, when you scroll down to what appears to be, you know, a reputable website, “HuffPost,” sure, you read this article about Cambridge Classica or Analytica, whatever it’s called, and then you scroll at the bottom and you have “You May Like” a bunch of ads for things that are like. Some of them are pretty dubious. You click on “Forget Lithoium. We’re advocating You Buy Electric Cars.” Fine, I suppose. It’s not pretending to be CNN, the website, but it’s interesting what’s going on here. So the media isn’t actually going after these two publications and the other publishers that redirect people from these websites to often questionable, sometimes questionable, not all I’d say, you know. Let’s just pretend it’s 20% ballpark, a number I made up, but it’s clearly some of these publishers are dubious and are not legitimate. But let’s look at “Wired Magazine’s” business model, let’s look at “Huffpost” business model and analyze what’s really going on here.

These companies are under duress, you know. What, with me, you could say, but they’re going after Facebook and no publisher, mainstream publisher, will go after what’s directly on their own web pages, again, because that’s how they make money. And this speaks to the broader problem of what I call $ad Revenue. So that’s ad revenue that is clickbait driven, that is about intensity of the viewership, about entertainment over factual information, the goal of which is to drive traffic to their sites, CNN or Wired or whoever other…Fox News, whatever. 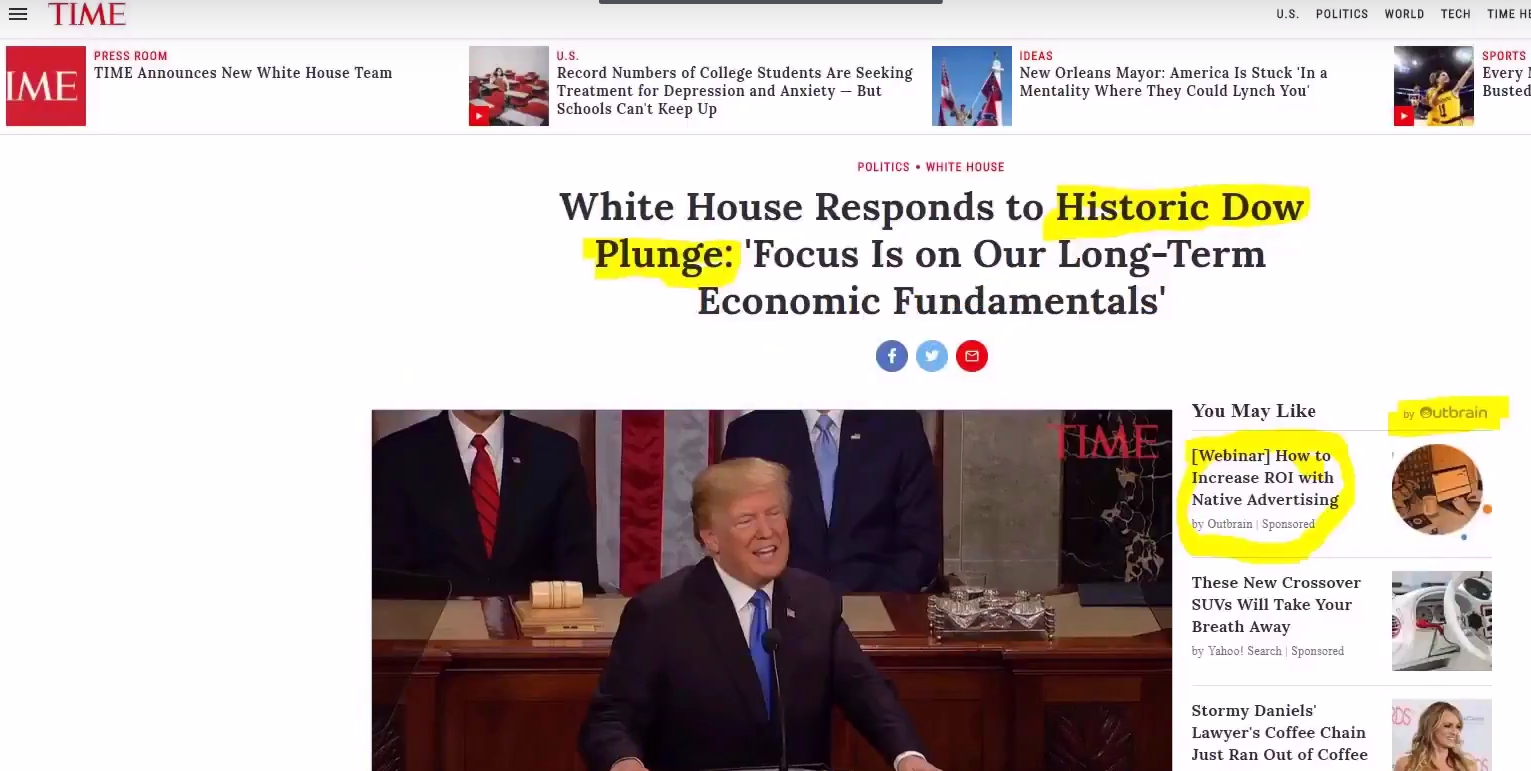 They’re all in the game of eyeball collection and then redistributing those eyeballs or selling those people off to various business commercial interests, which is fair play. But they’re not auditing the quality and the veracity of the claims on these click-worthy, little, crazy articles on the bottom because they need the money. And these content redistributors don’t have the time to vet everything themselves, so we all point at Facebook. Facebook this and that because Facebook’s a multi-billion dollar company. It should be able to solve this, but we don’t look at the Taboola and Outbrain. So, I guess, even the reputable publishers are saying things like, “Donald Trump is about to cause World War III. Click on this link. Find out more about his evil and crazy actions, and while you’re at it, look at the bottom. Take a look at this weird article and try some bingo.” So thank you very much. I thought that’d be kind of a cool thing to share.