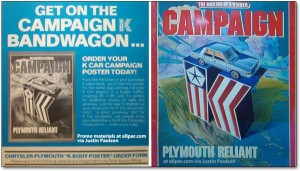 Hal Sperlich and Lee Iacocca had initiated the K-car series in 1977 with the intention of bringing these four cylinder, 25 miles per gallon vehicles into market. The Aries and the Reliant were genuine sellers for Chrysler. All new cars were derived from the K-car platform including the LeBaron, Chrysler E Class, the New Yorker, Dodge 600 etc. Instead of creating a car for the different price ranges in the 1980s every car was built on the same chassis to save money. Building a new car off of the old was common in Detroit, considering the Mustang was a retooled Falcon. 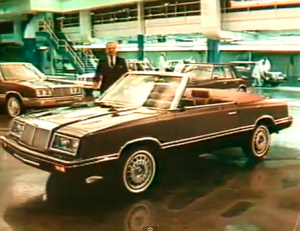 Initially, these K-cars were priced at $5,880 but with options that would hike the price up to $8,000 or $9,000. This triggered sticker-shock for consumers because too many Chryslers were released with multiple-options. Also, in 1980, the interest rates were as high as 18.5% and as low as 13.5%. And because the government loans came in 3 installments the publicity was bad every time a cheque was carved. For the last loan, Chrysler had to find more concessions from banks. The government even made Chrysler sell the private jets even though they were used to get a top manager from plant to plant quickly. The corporate jet was not a perk but rather a necessary tool for completing their work.