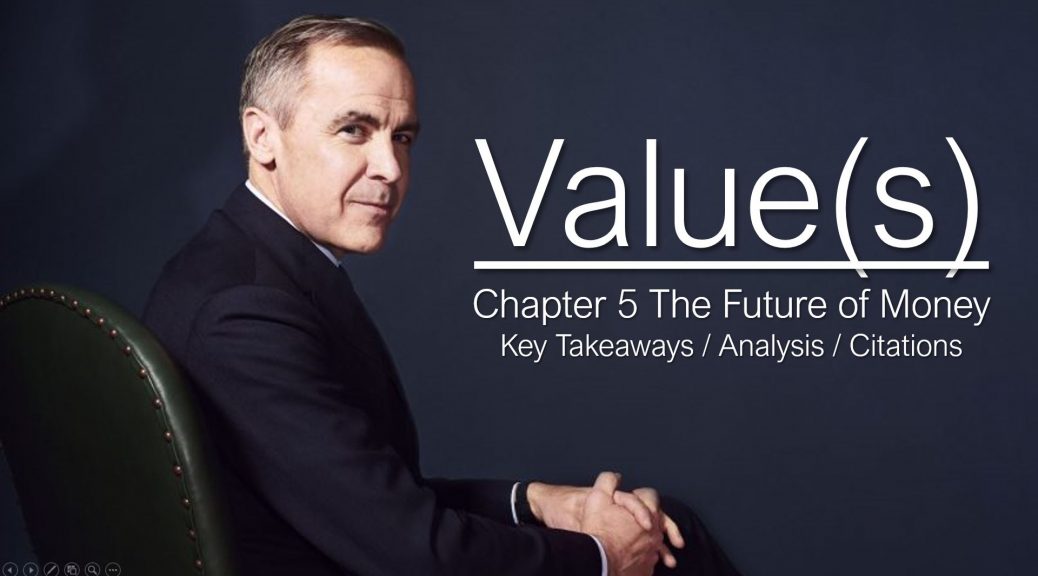 Chapter 5 The Future of Money

Carney opens this chapter by admitting that predicting the future is extremely hard. And so he will be looking at the past as a proxy for how money might evolve. But who knows. The mistake is to think you were right on a prediction because your modelled assumptions reflected reality well. Just considering the changing variables between the point of prediction and the point of evaluating the prediction, if you predict something correctly, then you should admit to yourself that you were to some varying degree “thoughtfully lucky.” Admitting that is easier said than done, especially if your career (portfolio managers, pollsters, policy makers) depends on your claim of superior judgement.

Revolutions become conventional wisdom in retrospect. Democratization of financial technology is happening all around us, well sort of. Carney admits the institutions typically do not identify innovation positively, and by definition are slow or disincentivized to respond to it.

Digital changes are coming, of course. Mobile telephony could change the future of money. This is why Carney is on the board of Stripe, effective March 2021. Enabling technologies, as the term suggests, allow financial innovation in every era. The telegraph to the stock ticker to the personal computer to the Bloomberg Terminal to the tablet. Cables on the Atlantic Ocean bed enabled messages to travel from North America to Europe…..the Internet ‘s instant information slowly replaced the Pits on the Stock Exchange floors, you don’t need the market makers. There are a bunch of other tools that have played a role in the evolution of finance, often in unexpected ways such as BitCoin.

Most prominent innovations start in the private sector then they get nationalized. The private sector is less equipped to manage currencies and the likelihood of debasement is very real as discussed in Chapter 1:

In 1694, the Bank of England as the central bank served as supervisors of the private banks.

Money is changing in response to “AI”, cryptography and social media information leakage. Likes could become a ‘social currency’…they already are for advertising revenue. However, the financial system is centred on dealers hubs and payment spokes. Most of the innovation in the West is around:

For Carney, Bitcoin is not the answer but the universal ledger is interesting. The blockchain subcomponent might have legs. But the incentive of contributing to the ledger in exchange for BitCoin may not be the right structure. Smart contracts could be useful. For Carney, however, the more things change the more they stay the same.

The Evolution of Money:

The underlying payment system is the same. The commercial banks are regulated by the central bank. All transactions in sovereign currencies are cleared by the central bank since commercial banks settle there. This is expensive. Payments can be slow. WeChat in China and PayTM is India cover most of the mobile transactions globally (about 90%) since most of the mobile payment customers are in China and India. Meanwhile, Robinhood may be selling trading data to large asset managers in order to front-run those trades.

So, for Carney however, trust takes years to be build, seconds to break and years to rebuild. For Value(s), maintaining and protecting public money is critical and so Carney won’t be very bullish on cryptocurrencies by definition. His warnings are on point however.

The Grounding of Private Monetary Innovations:

These private monetary systems are worse than tulips as an asset whose subjective value was out of whack with its price. Pay attention to debasement even with crypto currencies since they aren’t even scarce in the case of Dogecoin which was intended as a joke originally.

Mark Carney’s test for a new system of Money:

As this line of question implies, central banks are here to stay in Carney’s opinion.

Evaluating the Three Current Options based on Carney’s Test for a new system of Money:

Two types of money according to Carney:

These loans are supported by capital and funded by deposits. And the commercial banks settle with the central bank.

Cryptocurrencies and the Role of Money:

cryptocurrencies don’t meet the requirement of the role of actual money:

Mark Carney drops the A-bomb here which can be expected to be met with hostility: “Cryptocurrencies are not the future of money” page 114, Value(s). Adding to this in the Notes…”in the words of General Manager of the BIS (Bank of International Settlements), Agustin Carstens (2018), ‘Novel technology is not the same as better technology or better economics. That is clearly the case with Bitcoin: while perhaps intended as an alternative payment system with no government involvement, it has become a combination of a bubble, a Ponzi scheme and an environmental disaster. The volatility of bitcoin renders it a poor means of payment and a crazy way to store value. Very few people use it for payments or as a unit of account. In fact, as a major cryptocurrency conference the registration fee could not be paid with bitcoins because it was too costly and slow: only convention money was accepted.” (Page 546, Value(s)).

But Carney adds that they are useful for the low correlation with other assets in a portfolio and also as mentioned above this blockchain concept may have legs if the incentives and decentralization utilized properly.

The problem with stablecoins is that it still falls prey to cash on steroids (money laundering! terrorism financing! Other illicit financing!) Those things are bad for society.

Central Bank Digital Currencies (CBDC) are an electronic form of central bank money. CBDC bridges the divide between legal digital currencies and crypto-currencies that in time, Carney argues will be subject to being made illegal (at the exchange level principally and the anonymity is pseudo according to Carney). Currently, if we transact via accounts then we are using private bank ledgers that are fueled by the central bank. The only ‘risk-free asset’ of a central bank is the banknotes/cash in hand. CBDC is the best of both worlds: a) 24/7 payments, b) provide a stablecoin model that is backed by a publicly accountable/liquid/operationally sound solution of which work is slowly being developed.

Carney recommends a two-tiered system where consumers have an ‘indirect claim’ to the CBDC through a private bank or digital wallet (Apple Pay or Facebook’s Calibra). Central banks would supervise these wallets with integrations into smart contracts, and if the customer agrees, to better data pooling for improved digital services. Carney figures this is the efficiency gain such that paper money can be phased out (seigniorage: the value of that currency versus the cost to produce that currency). Carney believes there is true value here, consumers would be able to access the risk-free asset digitally….

The questions for CBDC are:

Carney then shifts his attention to musing about the social credit system in China. Just mentioning it really. Instagram and YouTube stars who are creating value that is underpinned by advertising revenue/marketing.

Money must be “resilient, responsible, transparent, dynamic and trusted” (122, Value(s)). Trust in independent institutions is paramount. The default situation is much like democracy, the public will cede control in exchange for the economic and financial stability that central banks facilitate. For Carney, the key is to spot the difference between good innovation and mediocre snake oil. The 2008 crisis triggered a revolution in crypto-currencies but the real value of money is in the public trust with central banks.

Analysis of Part 1 and Chapter 5

Citations Worth Noting for Part 1: Chapter 5: