The 7 Habits of Highly Effective People

It’s a dark and stormy night in the Atlantic Ocean, the communication officer runs from the bridge to the captain’s quarters and to say;

“Captain, there is light in our sea lane but it will not move out of our path!”

The captain exhausted in his bunker says “Well, tell them to move starboard!”

Minutes later the communications officer returns to the captain’s quarters stating that the person at the other end of the line has signaled back to the ship the following message: “No, you must move starboard.”

This enraged the captain. He got dressed rapidly, put on his captain’s hat, threw on his war medals, and rushed to the bridge. He could not believe the situation as the light was now extremely close to the bow of his ship.

The captain turns to his communications officer and says “Let them know who I am.” The officer quickly signaled: “This is the HMS Dreadnought ordering you to move starboard immediately.”

The person on the other end responded. “Yes, well this is the light house.”

Correct Principles/Habits are lighthouses: they do not move. We cannot break principles, we cannot force principles to change; ONLY we can change. We must learn to accommodate them because they free us and empower us.

“We shall never cease from exploring,

And the end of all of our exploring,

Will be to arrive where we began

And to know the place for the first time.”

We already know the 7 Habits but what is commonsense is not practice. That’s why:

We need to learn the 7 Habits,

We need to teach the 7 Habits,

We need to live the 7 Habits, and through this we will become lighthouses in our own lives.

The 7 Habits of Highly Effective People
By Stephen R. Covey [The following is a synopsis of The 7 Habits]
HABIT 7: Sharpening the Saw.

[IMAGINE THIS SITUATION]: Someone is sawing down a tree. You say, “What are you doing?” She says, “It’s obvious that I’ve been sawing this tree for hours.” You say, “I bet you’re tired.” She responds, “You have no idea.” You say, “Well why don’t you sharpen the saw?” She says, “’cause I’m too busy sawing, you goof!” 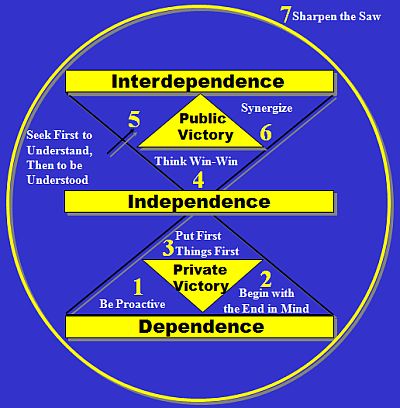 Take Time to Sharpen the Saw: Have you ever been too busy cooking  to take the time to wash the dishes?
Sharpening the saw means preserving the four dimensions of your nature.

Your physical self: stretching aerobics, exercise. Maintain your respiratory system. The key to energy is oxygen.

Your mental self: Read, learn constantly, seek to understand the world around you.

Your spiritual self: Renew your commitment to your value system. Do it in a way that is congruent with your own philosophy. Think deeply about fundamental issues> that is providing leadership. Then the mental planning is habit 3. You visualize your roles and goals each week, then you review that each day you are also in habit 3.

Your social emotional self: Do Habits 4, 5, 6. You will seek a win/win, listen, a provide creative problem solving. Come up with a better psychological agreement. If it is well done in a balanced and regular way, you will entrench the 7 Habits.

You need to exercise these four dimensions REGULARLY. This will help to maintain the other 6 Habits of Highly Effective People.