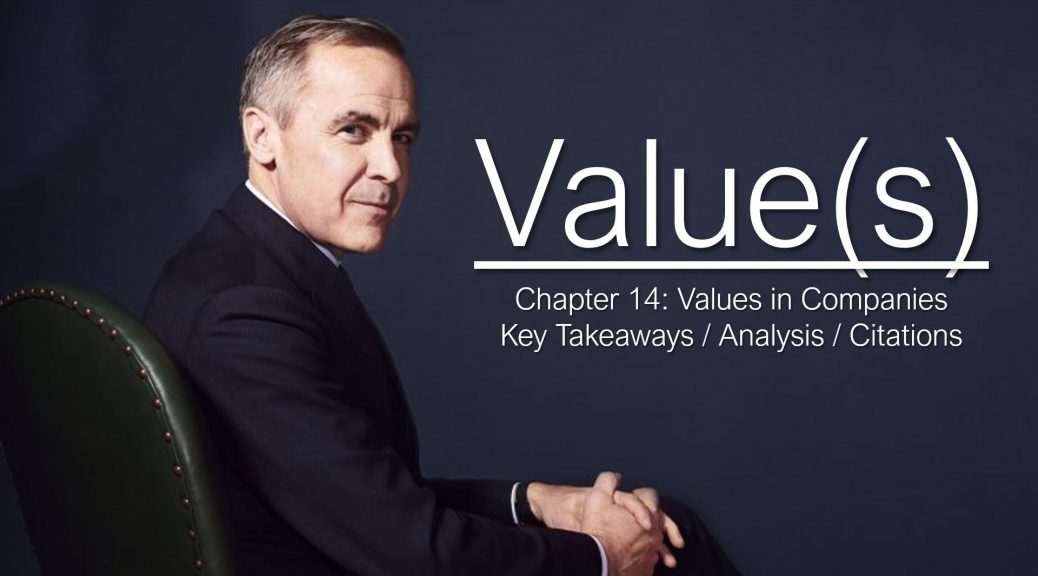 Carney starts out with the history of companies as a concept and what asks what is the purpose companies? It is not simply to make a profit, but rather to create value which is only partly quantified in the form of profit. For Carney, purpose requires balancing dynamism, fairness(?), solidarity (with employees and community), sustainability (across generations) and responsibility.

Wedgwood as the Model of a Modern Major Capitalist:

Five things that change us in a crisis;

3)      Triggers an improvement in reporting…

1st for Carney, a crisis triggers a reevaluation of what we value. In prior chapters, showed that the crisis was caused partly by:

·         the underpricing in risk and the lack of supervising and off-loading responsibility to the wisdom of the market in Chapter 7’s breakdown of the Financial Crisis;

·         the years of undervaluing resilience, with states failing to protect citizens despite ample warnings in Chapter 9’s breakdown during Covid;

2nd for Carney, a crisis changes our appraisal of value and values. Who benefits from these shifts? Shareholder, stakeholders are disrupted through change….

3rd for Carney, crises are a catalyst for new reporting of systematic risk.

·         1929 Wall Street Crash (crazy speculation by everyday people using loan money) + Roosevelt’s New Deal = creation of the Securities and Exchange Commission to protect the investors and  efficient markets. The SEC then also triggered the creation in 1936 of GAAP (generally accepted accounting principles) which became the global standard to ensure financial data could be reliably counted on.

·         2008 Financial Crisis = reporting for OTC derivatives, reduce the influence of shadown banking, new rules for securitization, accounting standards such as IFRS 9 was developed. IRFS includes what the expected losses are which provides more clarity.

·         The Climate Crisis, Carney is (hoping?) to bring about TCFD for consistent, standardized disclosures on climate-related financial risk.

4th for Carney, crises increased resilience, they make us tougher. Global banks have a buffer 10x the size prior. Trading has been reduced 1/2 , interbank leading is declined 1/3rd and cloistering of divisions within banks, with deep separation aims to prevent a systematic collapse.

Again, Carney argues the Climate Crisis has a valid target of net-zero. ¾ of the world’s coal reserves…

5th for Carney, embedding responsibility. Having purpose, Carney suggests might have prevented the financial crisis. In the aftermath, regulations, rules and compensation provide the teeth for a better future.

The Firm A Series of Contracts versus Purpose-Driven Companies at the Heart of an Ecosystem:

Carney goes through the history of company formation. The coordination of employees, investors, suppliers, buyers. He notes that corporations are indeed people both legally and in reality. For Carney, the company is not the sum of a bunch of contracts, however.

East India Company (the 1st publicly traded company in the UK) was incorporated with the purpose of protecting a monopoly on in Asia. The concept of the shareholder was buy shares of a company with the agreement that that capital would be used to advance the purpose of the firm, a larger goal. But during the industrial revolution, in 1844, the UK government passed a law that allowed incorporate without an express purpose and it made registration much easier. By the 19th century the focus on public purpose shifted to private purpose.

Ford Motor Company challenged the idea further when in 1916, there was a $112 million surplus on their balance sheet. Shareholders wanted a dividend by Henry Ford wanted to direct those profits into creating more innovation and to democratize cars for more people. The Michigan Supreme Court sided with shareholders but the amount doled out was much smaller through managerial discretion. This case Dodge v. Ford is central to the idea that shareholders own the company they have shares in. The UK Companies Act in 2006 and the Delaware Supreme Court in 2015 re-asserted that the purpose of ‘directors must make stockholder welfare their sole end.’ So, in the UK and the US, it is to maximize shareholder value. But there is disagreement, Wachtell, Lipton, Rosen & Ktaz LLP says shareholder primacy is not exactly what is going on….

Carney shows through legal examples in Canada and France that shareholder aren’t even owners of the company and thus the maxim of maximizing shareholder value is flawed. It is ture that shareholders do get paid after everyone else: creditors, bond holders, employees, suppliers and governments via taxation both in the UK and the US. But employees cannot diversify their risk to a company as Martin Wolf has argued so shareholders may not really be taking the most risk, aren’t really owners and certainly a poor shareholder who put their life-savings in is taking more risk than Warren Buffett in the owning of a given share of any company. Shareholders do not have much downsize risk either. So, for Carney shareholder primacy is flawed.

The separation of ownership of shareholders and control via the management which have their own self-interest (perks, pet projects, empire building) mixed in with meeting shareholder interests, triggered the Milton Friedman doctrine that:

a)    an executive is an employee of the owners of the business;

b)    the executive is responsible for maximizing shareholder value;

c)    shareholders (probably want) profits therefore that is the value in question;

d)    as long as the firm conforms to rules of society in terms of customs and law, they are good.

Carney sees Friedman’s ideas as useful but deeply flawed. Shareholder primacy is problematic and the proof is that Friedman gives himself an out in two ways:

1)    saying that money making should conform with customers and laws of their day. As Carney has shown, values are subject to their time therefore, Friedman has an out when there is disembodiment between the market and shareholders. Friedman claims any charity to employees is merely window-dressing. But Carney has shown in this book that there are times where there is deep corrosion in financial markets.

2)    saying that shareholders have primacy is flaws because shareholders merely have a ownership of the shares in a limited legal way. there is strain in how the wealthy treat the poor and how pay

Companies have Command and Control Dynamics so Models of an Economic is a Matter of Degrees:

For Coase in The Nature of the Firm, the firm is defined by costs difference of providing goods and services through the market. Transactions in the market hold the costs of gathering information, bargaining, and enforcement. These transactions bear costs that the firm save but the expense is the span of control, complexity and diseconomies of scale. The activities performed more efficiently in a Command and Control system within the firm with the rest completed through the market.

Carney argues that instead of Shareholder Value there ought to be Stakeholder Value, which also happens to be the latest trend in business school literature. Profit is essential but it is not the only thing. Many CEOs reject the notion that there is a single purpose to a firm. For Carney, a successful firm must deliver a balance of competing interests amongst stakeholders (which Carney neglects to define), but this is analogue to the individual who pursues the good life. Competitive advantage, for Carney includes, having an attractive purpose as Chapter 15 will show.

Other Thoughts from Chapter 14:

·         For a better tomorrow, we need companies that are motivated by profit and empowered through purpose;

·         Profit and purpose are both necessary and re-enforce each other;

·         Non-financial metrics should matter even if they are notoriously hard to measure;

·         The challenge falls with turning a purpose into practice (actions, outputs);

·         Maximizing shareholder value (short-term) is not the sole aim of corporations, full stop;

·         Environmental, Social and Governance (ESG) can contribute to profits and also purpose;

·         Danone is a company that embraces a entreprise a mission designation;

·         Executive level compensation needs to be connected to ESG factors and needs to be re-configured to align incentives that are longer term;

·         Companies should be engaged in improving communities;

·         Reporting is Key: two-way flow of information between stakeholders, shareholders and companies;

·         Good and bad ideas need to be tested and then good ideas scaled, and bad thrown away;

Ø  Chapter’s message in a nutshell: You get more with honey then you do with vinegar, be nice and have better outcomes in good and bad times.

Ø  The Covid crisis has accelerated a shift, but for how long? What is the reasonable band-width for which human’s recalibrate? Carney seems to be have a view that change is more permanent than might myself.

Ø  “During thee [Covid] crisis, we have acted as interdependent communities not independent individuals, with the values of economic dynamism and efficiency, joined by those of solidarity, fairness, responsibility and compassion.” (386, Value(s). This is not quite what is happening or happened or has it? How does Carney know from publications, statistical research or the people he hangs out with. People aren’t, pre-determined. There is speculation and sales in his statement that

Ø  If Carney is so certain of the benefits of a crisis, then logically should triggering a crisis not be an aim of effecting change? From 9/11 to detonating a nuclear weapon in the Antarctic, causing a crisis is perhaps a logically implication of his breakdown of how the financial crisis has progressed finance forward. Carney seems to imply that all the Dodd-Frank legislation was a major success, whatever has been implemented deserves a thumbs up, however the process of providing new safe-guards was very contentious and as Obama points out in my blog post, it wasn’t always that great.

Ø  An inverted view might be that the financial crisis brought on regulations that are a mixed bag of efficacy and punishment. Instead of weeding out the incompetent, regulations have cause a retrenchment of those most passionate about financed which has the effect of

Ø  Perhaps this will be addressed in Chapter 15, but how do you really objectively measure ESG performance, if the measures are game-able, they will be gamed, just a fun fact of human nature. Humans are cunning. Get used to it.

Ø  Carney took the Patagonia “9,000” applications example in two funny ways. 1) that Patagonia didn’t plant this story as a PR stunt, 2) that Patagonia has those high number of applicants because of their purpose (single causation is flawed thinking or perhaps Carney is simply trying to persuade).

Citations Worth Noting for Part 3: Chapter 14:

v  John Kay, ‘Shareholders Think They Own the Company – They Are Wrong’, Financial Times, 11 November 2015.

v  Martin Wolf, ‘Shareholders Alone Should Not Decide on AstraZeneca’, Financial Times, 9 May 2014.

v  John Kay, The Truth About markets: Their Genius, their Limits,  their Follies (London: Penguin, 2003).

v  Nell Derick Debevoise, ‘Why Patagonia Gets 9,000 Applications for an Opportunity to Join their Team’, Fortune, 25 February 2020.