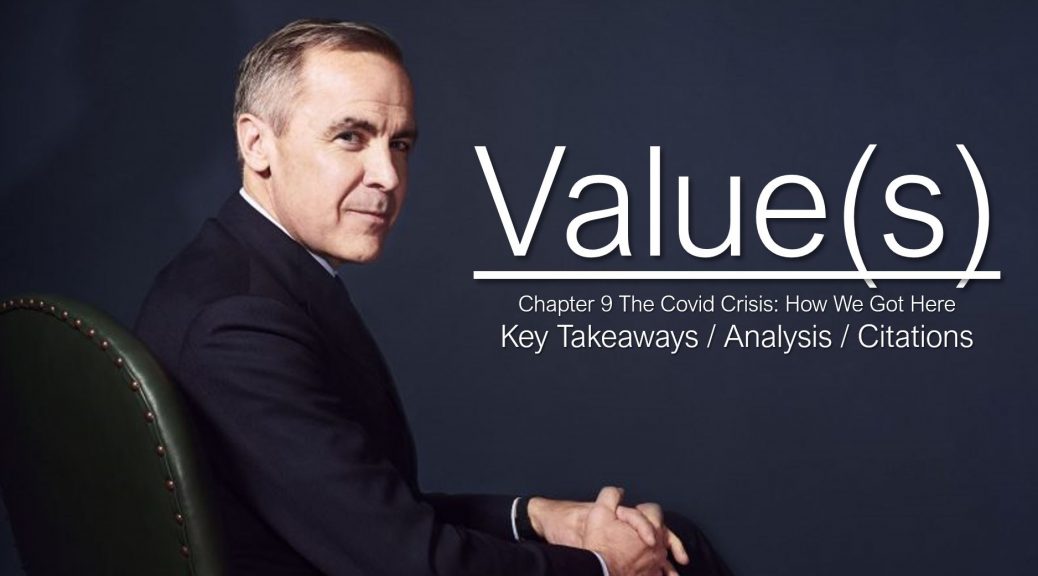 Chapter 9 The Covid Crisis: How We Got Here

This chapter discusses the discovering of COVID and all the other asks of this pandemic that we are all very familiar with. Carney was the governor of the Bank of England until February 2020. Economic and family priorities.

Duty of the State:

Carney goes through a review of political philosophy from Thomas Hobbes (1588 – 1679) to John Locke (1632 – 1704) to Rousseau (1712 – 1778) to suggest that in exchange for giving up certain freedoms, the state promises to deliver protection to its citizens. Much the same with central banks; that the public gives up the detailed nuanced control of the money supply in exchange the financial system delivers prosperity.

Capacity of the State must have:

3) fiscal capacity: power to tax and spend: state capacity has moved from 10% of GDP to 25% to 50% of GDP with corresponding services to protect citizens from COVID 19.

Calculating the value of a human life: is hard to do. But there is actuaries to put the intrinsic versus investment value of a life or the net present value of all future cashflows that person is predicted to generate. Life is priceless. Sometimes the calculation is about the productivity of the person in life…..

Schelling’s “The Life You Save May Be Your Own” points out that the value of a life principally the concern of the person living it. Value of a Statistical Life (VSL) became the industry standard. The example Carney provides is the a risk of death in a high-risk job might be 1 in 10,000 and employees receive $300 of danger pay, therefore the VSL is $3,000,000. There are several other methods: 1) stated-preference, 2)hedonic-wage, 3) contingent etc. And different countries use different metrics in similar circumstances. In Canada, the estimated range of a human life is $3.4M to $9.9M CAD meanwhile in the US, the estimated range of a human life is $1M to $10M USD. Healthcare looks at quality-adjusted life year (QALY) and cost-utility versus cost-benefit analysis. Schelling’s assumption about how a person can evaluate the value of their life. VSL usage is a moral choice. Wealthcare many not be measured properly according to Carney. Another model is the VSLY Value of a Statistical Life Year. The question remains: do all lives have an equal value or is it the number of life years should be treated as equal?

(1) public sector (other parts of the government,

(2) the private sector (people and companies),

The government agrees to pay those savers back with interest at a future date. In the short-term the government uses that cash sucked out of the economy in exchange for the treasury bills to issue stimulus cheques back into the economy. Keynesian economics says that the more stimulus there is, the more economic activity which enables more private savings which then fuels more transactions for bonds. The government can borrow, unlike an individual, through this system as long as the economy is growing at the same or greater rate then that of the debt. The economy is growing at the same rate as debt then the debt to GDP ratio will be stable. If the debt to GDP ratio is stable, then the government can argue for continued investment in its debt securities (ie. bonds).

An additional layer of complexity is that: (4) the source which is the Mint in Canada and the Federal Reserve in the US does not print actual paper money much any more but does indeed ‘print out of thin air’: electronic money, that is credited in the treasury department’s account. In exchange, the Fed then holds treasury bills. The key consequence of issuing too much money with this source (4) is inflation whereby more money in circulation is chasing the same limited number of goods available thus driving the price upward of the individual goods. The 10 year Treasury Note then starts to go up and inflation creeps in. In this case, the Fed needs to increase interest rates to counteract/dampen the purchasing of the demand side…..

Citations Worth Noting for Part 1: Chapter 9: