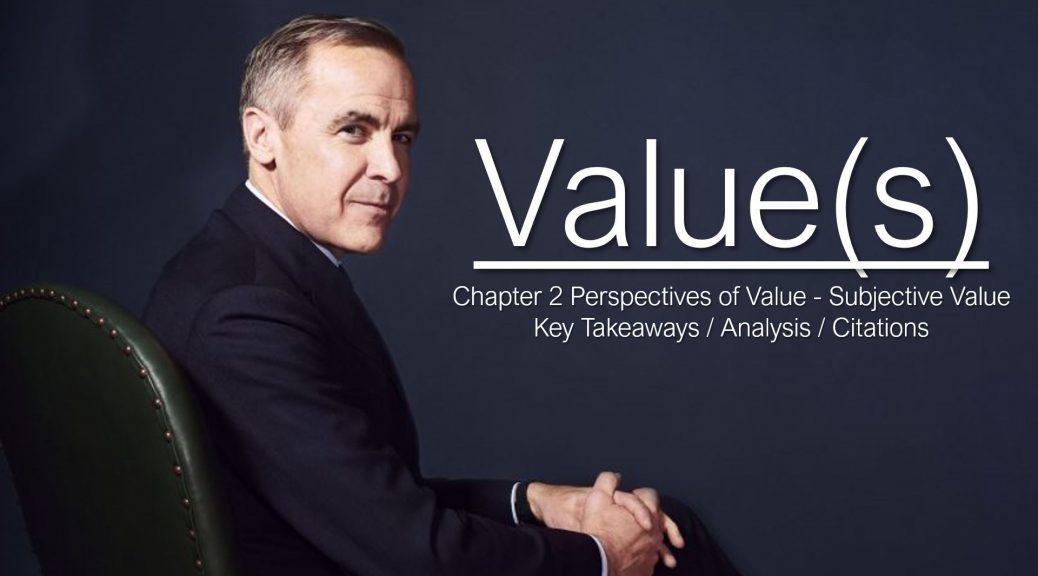 The last chapter was about objective value and this chapter is about subjective value which Carney shows is how the world operates today.

The central question in this chapter is: if beauty is in the eye of the beholder, is the same true for value? Subjectivity is the demand and supply way of deriving a price which is a biased perspective of any individual actor as it pertains to any commodity.

Damian Hirst created an art piece that showed that the act of valuing is art itself. The value of money and the value of art collides. Morris, the director of the Tate Modern, made a plea against blockbuster art installations and instead emphasized the British art that Tate holds in ‘trust for the nation.’ Morris’ view was that you can’t really value art but you still have to pay for it. Tate Modern is a social space not a marketplace…..

The emergence of the Neoclassicists is critical to our understanding of value. In short, the value of a good is in the demand and supply of that good itself and not in the labour as the classists (Smith, Ricardo, Marx) argued.

The utility of goods; they are good for something equals their value. Carney discusses a group of early neoclassical thinkers:

Marginalism was the major breakthrough that ushered in the neoclassical view for Carney. Marginalism asks: What’s the particular availability of the good in a given time and place? That’s what matters! It’s the marginal value, stupid. Not total supply but available supply. For example, you are willing to pay for a pair of shoes at $100 instead of the $60 retail prices because it’s convenient. And so you are then also willing to pay another $80 for a second pair for the weekend. The consumer surplus is $180 – $120 which is the retail price x 2 pairs = $60 is considered the consumer surplus. A third pair of shoes would be valued at $60 which totals $240 – $180 which is the retail price x 3 pairs = $60 consumer surplus. The value of each subsequent pair of shoes changes in a judgement. The more ice cream you have the less each additional scoop is valued and in computer coding, the best coding is not developed by more and more developers in the Mythical-Man-Month i.e. the law of diminishing returns.

Carl Menger (1840 – 1921), William Jevon (1835 – 1882) and Leon Walras (1834 – 1910) capture this view best. They argue that value does not exist outside the consciousness of human beings and thus is subjective. If this is so then, an environmentalists value of a tree and a lumber jacks value of that same tree can be wildly different. And that reflects the reality we live in. Human beings live in the moment and do not price based at the system level. So Walras tried to include a system level view but no one really cared.

Carney however goes on to explain equilibrium of markets of exchange where all marginal benefits and costs are equalized. Utilitarianism is developed to maximize the greatest good for the greatest number of people, popularized by Jeremy Bentham (1747 – 1832). John Stuart Mills saw that life is more than happiness but the pursuit of meaning and the ability to get things done.

He believes that cost-benefit analysis is more complex, especially for goods and services that aren’t generally priced. Totally obvious and true. Except that “animal welfare” and “access to public buildings” are examples of subjective values that Sunstein is biased towards and as a member of the Obama administration would be advocating for without capturing actual preferences beyond representative democratic processes which are highly flawed. Carney shows that there is a knowledge problem with knowing what people value beyond simple price discovery and transaction price. Much of the most valuable things in life aren’t measured in capital terms. “Money is a proxy for value.” – Professor Nerdster. There are efforts to measure what people value: randomized control trials, retrospective analysis and other strategies to measure what money can’t buy but it is rather wanting with current data science technology and the lack of control groups….in real world settings.

The value of life is not easily measured either. It’s priceless, obviously. We can’t really measure the value of the person. So Carney shows that we aren’t really going solve this problem of how to value things….

So Carney pivots here. He explained objective value and subjective value. Now he will explain how the fact that today, there is no underlying, fundamental or intrinsic value that isn’t already reflected in the price of a commodity, and that markets define value and demand and supply expresses that value but that this is very flawed. Carney will argue we are mispricing at a societal level the things that are most valuable.

Describes the dangers of performativity “how we talk effects behaviour” she would like you to believe what she believes. She wonders are shareholders as the biggest risk takers or is it actually the employees? Anyone can call themselves a value creator and so this is limited term for value creation.

There are four consequences of the victory of the subjective values system:

Economist are bad are creating generalizable theories because humans will defy expectations, reality is more complex, hence Keynes’ famous claim that there are madmen in authority who are typically trying to distill academic writings into practical decision-making. Reality of unpredictable human behaviour will screw up academic theory in the following ways:

Humans are only rational when they are dispassionate about the outcome. We tend to support past decisions believing them to still be good. Subjective values are more important. We value the present much more than the future. We tend to value distant issues at a lower rate. We didn’t invest in pandemic preparedness or care homes. Banks didn’t build up enough buffer to avoid the financial crisis; moral hazard. Carney refers to these human frailties as the tragedy of the horizon. The environmental catastrophe that Carney believes is coming could and should be avoided through actions now.

The Welfare of Nations

The Theory of Market Sentiments

In a society that rewards value capture, our social psychology will adjust accordingly, as per Adam Smith’s view of the desire to be well-regarded and well-liked. The problem is much more about what is not measured. Carney asks:

Citations Worth Noting for Part 1: Chapter 2: