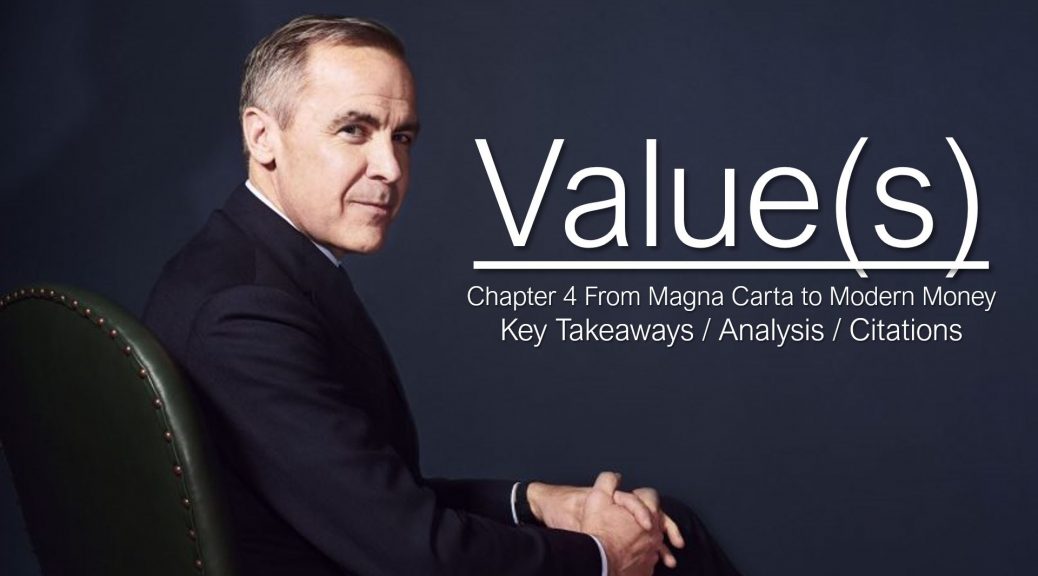 Constitutional Principles Underpin Money: Sound money is a societal convention that is backed by institutions that reflect some abstract form of that society’s values in Carney’s view. He then turns to another societal convention, democracy to illustrate the value of rules that are independent of the will of strong actors whether it be bankers or politicians. Carney makes the case here that Britain’s innovation in banking stems from its innovating in constitutional order.

Magna Carta 1215: was on display at the British Museum in 2015. It is a bunch of rags really. But Carney sees the 800 year anniversary as a reminder of its amazing story. It was a product of its time. There were a series of Magna Carta documents, each increased as a pragmatic negotiation between King and powerful interest groups.

Factors in the Run-Up to the Signing of Magna Carta:

Magna Carta was issued under fiscal, monetary and political duress in June 1215 with the help of the Church. Within 3 months, King John re-neged on the deal, thus triggering the First Baron’s war. The Magna Carta was the most detailed effort to win favour with the nobles. It was signed 16 years into King John’s reign. A council is the embryonic parliament and parliament is the embryonic future form of democracy currently being developed in the 21st centuruy. And Magna Carta’s text has been used around the world. The exercise of the authority must be approved by such agreements.

The key ideas from Magna Carta that were novel at the time were:

Just as Magna Carta was a product of the refusal to be ruled arbitrarily. Carney argues that the gold standard was undermined when society rejected that arbitrary measure of value.

The Bank of England charter in 1694 was also novel. The authority of independent bodies enables this innovation. It was the only joint-stock bank in London by the 19th century. It was criticized for acting against the public interest since external international obligations superseded domestic interests. It became the lender of last resort and adopted the Bagehot principle that it would lien against good collateral at hefty rates in financial crises. By the 19th century, it was the monetary policy hub for the world and operated the gold standard. BoE was nationalized in 1946. The BoE was not intervened with by the government.

There is monetary and financial stability:

Monetary Stability: money’s value can be counted from the mint. 2% inflation target.

Financial Stability: ability to provide loans, ensure orderly response during shocks, and support transactions. Every transaction gets settled in the Bank of England in the United Kingdom.

The Breton Wood system collapsed in 1971, there was in a series of botched experiments in the United Kingdom. There were price increases of 700% in the 80s. Unemployments was very high in the UK. The electoral cycles and firms and households were anticipating the preferred rate of inflation, and then let the monetary authority follow through. Rather than the other way around. There was criticisms that the Bank of England would protect its own interest as it pertains to protecting its gold reserves over that of the general public, during times of uncertainty. But that faded as it became the lender of last resort (intervening to protect interests).

Removing political interference and a commitment to low inflation targeting helped to provide transparency about what it is a central bank is doing. For Mark Carney, low inflation targeting was a major innovation in central banking. It basically made the work autonomous, data-led, non-ideological and empirical….just like Adam Smith would have liked.

The Bank of England Act of 1998 was the spirit of Magna Carta realized in monetary policy. Power flows from the people via Representative Democracy. The big highlights of the new framework was:

Bank of England has to explain its goal. The financial crisis happens roughly every decade, according to Mark Carney. The 2008 crisis caused a decline in trust. There are no macro-economic interventions. The counterfactual of a policy is very hard to prove. So us mortals are left with our deductive reasoning…..

Central banks should address financial risks. It needs continual trust. Changing the bank notes to Jane Austen and Turing is the more symbolic work that Mark Carney’s leadership at the Bank of England delivered. Technocratic decisions have the slur of gold even though it was done away with years ago…Carney believes in illustrating a better understanding of Bank of England decisions. They publish the objectives of the bank to try to meet people where they are. Bitcoin doesn’t work according to Mark Carney. The next chapter will blow Bitcoin up.

Analysis of Part 1 and Chapter 4

Citations Worth Noting for Part 1: Chapter 4: