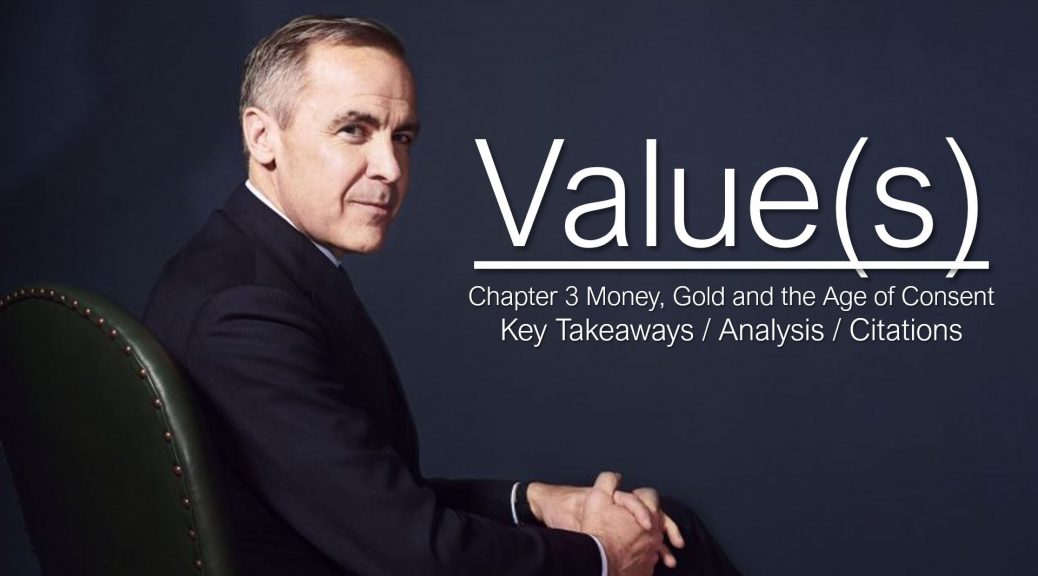 Chapter 3 Money, Gold and the Age of Consent

The Bank of England holds $180 billion worth of gold bullion which has been pulled out of the earth from the Canadian arctic or South Africa brought to London and put in a vault…back…into the earth. At one point, as will be illustrated, gold was money and then we had gold backed money and the central banks engaged in the selling of gold to each other and now under FIAT, it no longer has the value that it once did. The gold is held at the Bank of England because it was the promissory basis of banknotes such that a person would walk into the Bank of England with a banknote and receive a clip of gold in exchange.

Money is subjective value. We can all agree that money is better than bartering. But money is a social convention, it is an IOU. But what is money for Carney:

The Debasement of Money, A Classic Paranoia:

The debasement of money in the Roman Empire etc was a major problem in currency devaluation as the banknotes are typically very cheap to make and the temptation to print more than the economy requires is always strong. And ultimately, the temptation to over print or over create is followed by the reminder that such a decision causes inflation and debasement.

Private money collapses happen gradually and then very suddenly…in a pattern of promise, trust and then disillusionment, according to Carney.

The Bank of Amsterdam:

The Bank of Amsterdam started a revolution in banking created a bank of money, confidence was maintained. Its ability to be the central bank, the lenders of last resort was secure. Then the Bank of Amsterdam became heavily invested in the Dutch East India company (VOC) and there was a run (where depositors all demand their money at the same time) and the bank collapsed. Transparency was critical. You need purpose, transparency and accountability to get people to believe in your bank and there is always a risk you will destroy that trust.

Free banks were rogue US banks before the central reserve banks were established in 1915. These free banks would reduce the gold held to back their commercial bank money that they issued, thus debasing their own rogue currencies that were issuing notes. And their value varied in the market like an unstable asset. Guarding against debasement was too difficult. The solution was to develop FIAT currencies and a central bank that would act as a lender of last resort should liquidity dry up. The central bank concept pioneered by the Bank of Amsterdam would be implemented in England (1694 to present) and backed by institutions led by institutional independence with the ability to set out monetary policy.

Metal-backed money was problematic since there was an unsteady supply of precious metals. Silver and gold coins were the medium of exchange in the Roman empire and the shortage explains why the Roman coinage outlived the Roman empire. Roman coins were used into the Charlemagne era (768 – 814). The Spanish learned the hard way that getting gold money did not make you rich: if the supply increases at a greater rate then the consumer price index then purchasing power decreases ie. inflation.

The Glorious Revolution 1688 in England and the success of the Dutch as a global power triggered a financial revolution.

The Franco Prussian war of 1870 was a turning point for the gold standard. The France, Russia and Austro Hungary all halted convertibility of banknotes into gold. Thus, Britain became the superpower that continued to support the gold standard. Path dependence leads to the most powerful nation imposing its standard on the rest of the world within 150 years. A standard that was accidental. Today, the US and China are deciding the future of currency globally in this same way.

Workings of the Gold Standard:

1) The goods are exported,

2) the exporter of those goods receives payment in gold and then,

3) that gold was minted into a coin locally,

4) The importer buys that good and pays with gold…..

In the trade deficit (importers) country, gold flows out in net. That sets in train a mechanism of self correcting prices downward because less gold was chasing the same amount of goods.

In the foreign country, more gold was chasing the same amount of goods so prices rose. With imports more expensive, people would consume less of them and more of the now cheaper domestic produce. The trade deficit would shrink and the balance would be restored.

The problem is: in a complex financial society, gold was not how this above process was done but rather in currency. So:

The gold exchange standard works because the Bank of England, Bank of France and Bank of Reichstag all were credible. Trust was essential. This trust wasn’t a product of the system’s design. There is no magic to keeping money valuable, the pressures to print wildly are always present. Trust in the gold standard was the means of managing the printing of paper banknotes for convertibility. And such a system was contingent on stability.

There are three factors in re-enforcing the Gold Standard System:

By the end of the 19th century, the flaw in the gold standard become more evident: the amount of gold mined was not keeping pace with economic demands leading to deflation ie. prices and wages fell. Since the economic power was not singularly in London anymore, the gold standard was harder to manage. As more countries joined the gold standard in 1870s, the amount of gold available was not able to chase the same amount of economic activity, this was causing deflation in general prices. When they found new gold deposits in Alaska, South Africa and Australia the downward pressure subsided but the increased again as the new supply faded. The system turned to unbacked foreign reserves thus weakening the creditworthiness within banking.

Central banks were conflicted with being lenders of last resorts (internal balance) versus convertibility (external balance). There were more frequent bank runs and more provisions for liquidity. There were self-fulling behaviours in which the Bank of England was being called the coordinator of international cooperation. The Bank of England tried to manage the 1890 bearings crisis in Argentina. The Bank of England loaned from France and Russia to help Argentina. The political movements became more working class parties, it was harder to manage the system because the gold standard model was built before fractional reserve banking and paper banknotes. It seemed fraudulent to laymen voters. Governments prior to democracy could manage their currency above all else. But now citizens were asking about the gold standard, just as many crypto-currency enthusiasts are asking about FIAT in the early 21st century.

Carney’s Diagnosis of the End of the Gold Standard:

The gold standard was not aligned with ‘solidarity’ of domestic requirements. It was a product of international exchange in a multi-polar central banking world. The First World War triggered the end of the gold standard. The centre of economic power shifted to the US but the US wasn’t willing to follow the gold standard. The rise of trade unions prevented wages from adjusting in response to deflationary equilibrium….

For Carney, the gold standard’s values were not consistent with values. It was about international cooperation between central banks rather than the internal cooperation of citizens in a domestic polity.

There was a 1920 Mansion House bankers dinner where Montagu Norman assumed the gold standard was coming back. He arrogantly pushed his case. But as Carney points out, the people who are often least aware of changes in the financial world are the bankers themselves who have vested interest in retaining its existing structure. This was the era of “never elaborate and never explain” according to Carney. The UK reinstated the gold standard in 1926 with disastrous results. And then had to  abandon the gold standard again in 1931. UK had screwed-up their economy as a result.

Lessons from Gold Standard for the Values:

Citations Worth Noting for Part 1: Chapter 3:

One thought on “Value(s) by Mark Carney: Chapter 3 Money, Gold and the Age of Consent: Key Takeaways / Analysis / Citations”