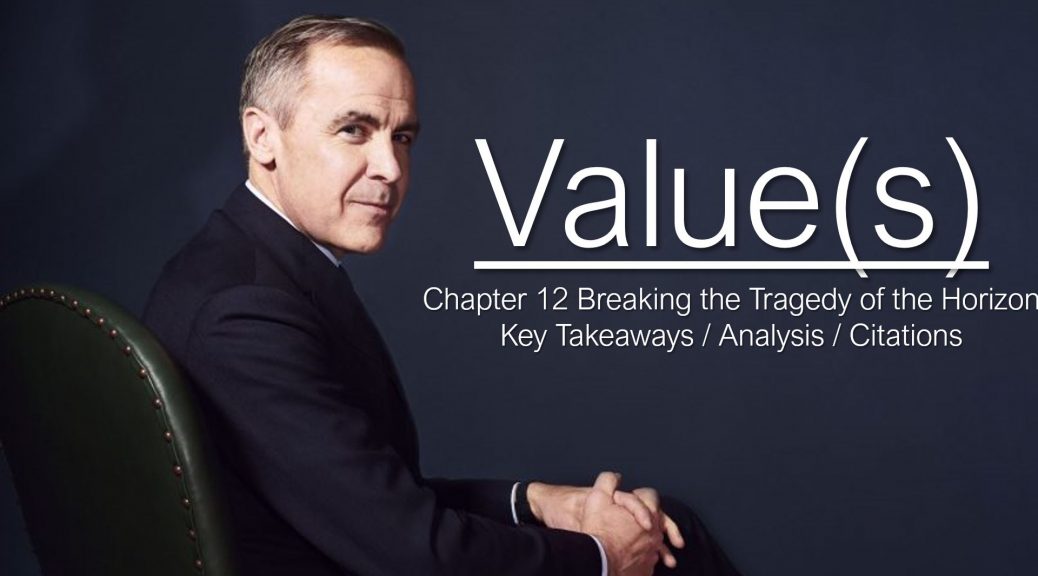 Chapter 12 Breaking the Tragedy of the Horizon

One of James Carville’s Clinton ‘92 campaign slogans was “It’s the economy, stupid”. For Carney is “it’s the transition, stupid!” If you can get private financial institutions to truly back the transition then you can contribute to being a good custodian for generations to come. Carney’s work for Glasgow COP26 centres on organizing the plumbing for these financial institutions. In chapter 15, “Investing for Values” Carney explored this further. In this chapter, Carney argues that there are three technologies: 1) engineering, 2) political and 3) financial that need to be marshalled to address climate change.

Driving Scale and Innovation: There will need to be major improvements to these hard to change sectors. Very hard to outlaw fossil fuels (ie. decarbonize) which are cheap and do not have a large upfront CAPEX:

Setting the Right Goals. Carney argues that we need to understand the consequences of our preferences. But he also wants to convince you that his preferences are the best and you should follow him:

Carney argues that companies must take the race to net-zero seriously. For Carney, the financial system needs to take climate change into account, because that’s where the smart money is headed already. Firms can report their own climate disclosures. COP 26 in Glasgow is going to focus on the financial approach. There is money to be made in the transition. And Mark Carney argues that the smart money is turning green.

Carney’s 3Rs, these are the three areas needed to make this work: reporting, risk, returns

Reporting: TCFD network: a solution by the market for the market which Carney forcefully argued didn’t work in the 2008 financial crisis….at any rate, their total assets under management is over $170 trillion which includes the largest banks, pension funds asset managers and insurers. The largest AUMs are asking to disclose their carbon footprint in line with the TCFD.

The metrics used are

The disclosures cannot be static! They should be dynamic such that they reveal financial risks/opportunities. Ask the company to explain how they will reach net zero….

As mentioned in chapter 11, there are physical and transition risks. Climate change differs from most other risks in that:

The Bank of England has stress-tested the UK financial system for various climate pathways, scenarios. Climate stress tests about engaging the developers of the model in the contingencies and factors at play.

The creation of green and transition bonds is an important catalyst. Carney believes that helping companies moving from brown to green is a consultative practice. The typical best plans are as follows:

Green bonds will not be sufficient to pay for the green future. Value will be in identifying the transition. ESG are focused on the s and the g. Investor should be able to calculate the e net present value. “We need 50 shades of green.” (325, Value(s)). Needs to be able to get a sense of how serious a given company is at the senior management level. Embedding metrics in the motivation. The efficacy of transition plans.

Ø  Carney doesn’t necessarily call out who the polluters are…he doesn’t put pen to paper to say that fossil fuel companies are the problem and could be part of the solution. And what to do about Alberta’s transition? Carney doesn’t talk about a way to help Albertans who have driven the Canadian economy forward in terms of GDP should be compensated…and or supported in retaining economic development locally against the back drop of the Rookie Mountains. Think about how Britain settled the slavery questions in 1834 by compensating the owners of slaves? Then think about how the US settled the slavery question between 1861 – 65? Oil is like slavery in some ways as I argued a decade ago.

Citations Worth Noting for Part 2: Chapter 12