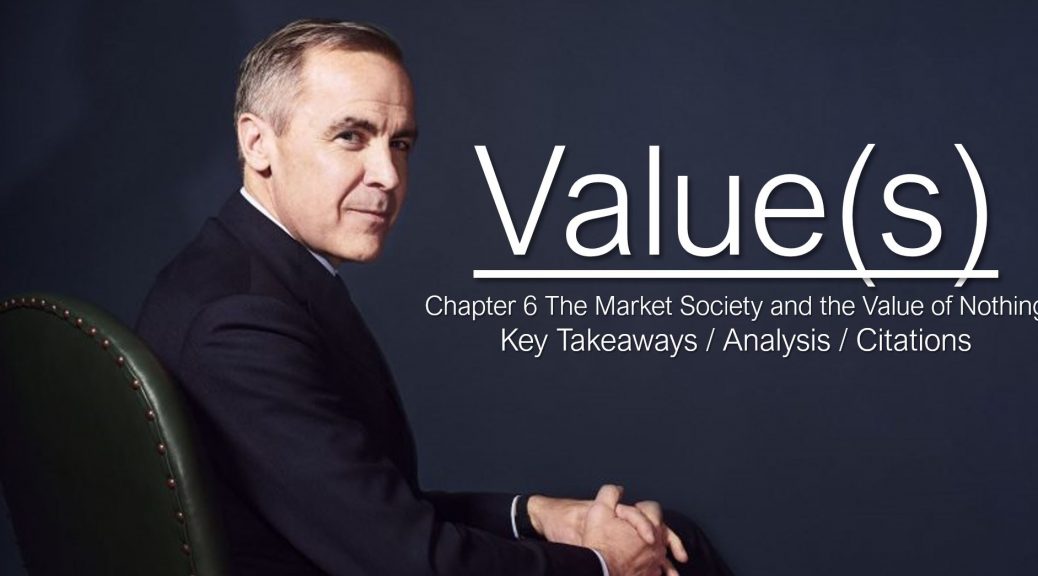 Chapter 6 The Market Society and the Value of Nothing

The way we value the market has bled into how we value everything in society and that is harmful to public policy, society and quality of life.

Gift giving is an emotional value that cash cannot measure. Economic value is commodification these days. The reality is market value is taken to mean intrinsic value (the net present value of all future cashflows). And so in the market society, they know the price of everything and (try) to calculate the value of everything.

There is another way to view reality. Relative equality is better for society, more opportunity distributed to as many people as possible is better for GDP and for happiness within society. Inequality has a negative impact on economic growth. 1% Gini-point increase in inequality leads to a 6% increased chance that economic growth will fall in the coming year. Carney pulls out some social science research (warning: difficult to base conclusions on data science that involves human subjects as we aren’t always rational and will defy expectation because we are awesome creatures!). Carney shows that inequality is bad based on the IMF research etc…over the long term. In the short-term, inequality is shown to be positively correlated to GDP growth.

Carney believes that happiness is the key to life, not just money. He lists the keys to happiness:

A little bit of money to the less well off can truly boost GDP. For example, after about $75K USD a person’s happiness is not necessarily improved with that much more money according to Milanovic’s Capitalism Alone. Happiness does not equal just prosperity. John Rawls veil of ignorance as in, if you were born again but didn’t know under what circumstances you were to be born, what kind of societal arrangement would you want….is the marker that Carney supports.

Carney argues that Freakeonomics is incorrect when their authors argued that economics is morally neutral. Carney believes that economics is moral. He’s in good company. Adam Smith and Socrates also believed that economics is a moral science. Whether economists realize it or not, they typically are trading in a utilitarian approach of some variation: “to maximize the greatest benefit to the most people”. Utilitarianism is about the happiness of the most number of people according to Bentham. Carney’s point here is that economic growth maximization is not necessarily going to lead to the best welfare outcomes in society. There is a risk as Milanovic argues that the endpoint might be “utopia of wealth and a dystopia of personal relations.” page 137, Value(s).

Carney asks, what about:

Carney believes the social capital (altruism, supporting each other, sharing) has been crowded out by economic capital, selfishness. John Kay’s approach is useful here. That the pluralism of capitalism enables a) creative trial and error testing of ideas where the bad ones disappear, b) entrepreneurial energy is focused on wealth creation rather than value capture/rent-seeking.

Capitalism is the best way to organize society. China and Russia are have capitalism without democracy. A political capitalist society has 1) an efficient technocratic bureaucracy, 2) rule of law, 3) autonomy of the state.

What was needed to build on the capitalist foundation is:

Carney worked with Tommaso Pado-Schioppa as the Italian Minister of Finance at the IMG/World Bank Annual Meeting in Dubai in 2003. His argument was that if the market is deep and liquid it will move towards equilibrium or that the market is ‘always correct”. Tommaso said that this ideal had gone too far. He argues that ”when we grant an entity infinite wisdom, we enter the realm of faith.” page 135, Value(s). In short, policymakers should not simply take their orders from the masters of the universe, the market is not infinitely wise. His major contribution is that:

The Social Contract is Breaking Down:

As Michael Lewis explains to the Princeton graduating class “Success is always rationalized. People don’t like to hear success explained away as luck – especially successful people. But you are lucky to live in the richest society the world has ever seen, in a time when no one actually expects you to sacrifice your interest to anything.” (page 138,Value(s))

Equality of opportunity has fallen as well. Social mobility:

Gatsby curve. People who get rich generation by generation versus nouveau rich.

Carney argues for creating a foundation of inclusive capitalism:

Commodification or Hyper-Capitalist Society that Carney would like to Fix:

The thesis of the book remains: “How do we learn to be moral again?” – Rabbi Jonathan Sacks with a sprinkling of:

Analysis of Part 1 and Chapter 6

Citations Worth Noting for Part 1: Chapter 6: