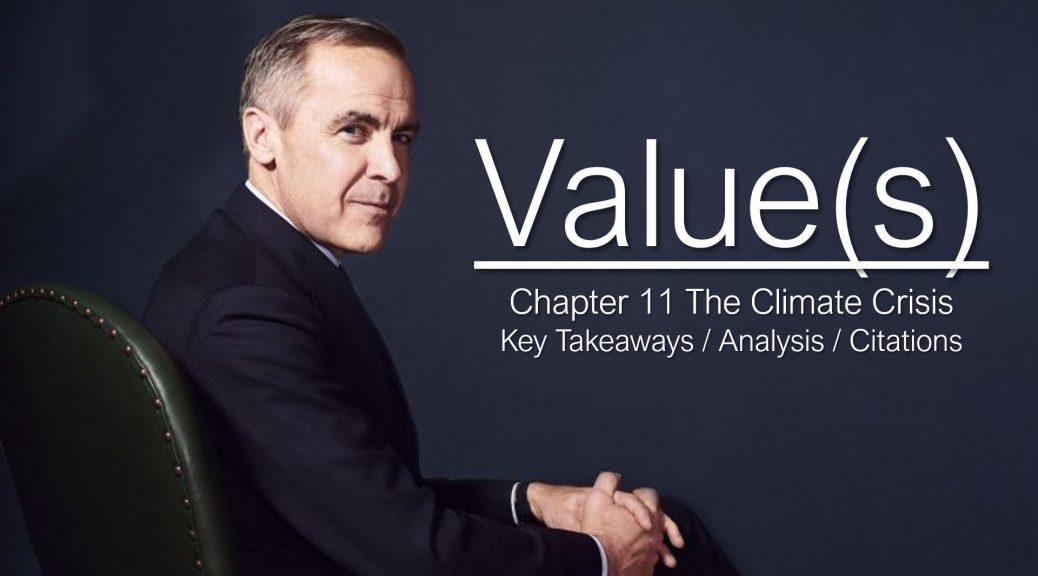 For 11,000 years, the stable Holocene era has afforded humanity the playground to thrive. Now we have created the Anthropocene which is driven by human impacts on the planet. Carney does not go into any counter-arguments to say that the impact of human activity on the planet is correlated 1% with climate change or 99%…for him the data is conclusive. In the 1850s, the Industrial Revolution drove up global temperature averages by 0.07 degrees Celsius per decade. The planet’s average temperature is up by 1 degree Celsius  since the 19th century.

Now, market prices of assets are being impacted. Climate change is likely creating:

What is the cause?

The UN’s Intergovernmental Panel on Climate Change (IPCC) has argued that there is a 95% chance that human activity is CAUSING the global warming / climate change. The release of GhGs (Greenhouse Gases) with the most problematic being CO2 which, during rapid industrialization and growth has meant that over 250 years, humans have burned ½ trillion tons of carbon. Trends suggest another ½ trillion could be released in the next 40 years…¾ of the warming impact of emissions is CO2, with the remainder being methane, nitrous oxide and fluorinated gases. Trees cannot carbon capture to rebalance. Temperature and CO2 emission move roughly together, therefore we know what the carbon budget  ie. the amount of carbon dioxide that be released into the atmosphere before temperature thresholds are surpassed.

The planet as a system would accelerate into a dangerous feedback loop if average global temperatures go past 1.5 degrees Celsius. The IPCC predicts that if temperatures reach 2 degrees Celsius above pre-industrial levels then 1) sea levels could risk 10 centimeters, 2) ¼ of all people could experience severe heat waves, 3) coral reefs will die off almost completely… 4) permafrost could further unlock CO2 and methane accelerating the trends would blow the budget wide open.

Carney advocates a stabilization of temperatures at 1.5 degrees Celsius. above pre-industrial levels. To do that:

Children born in 2021 will have to generate ⅛ the amount of CO2 emissions compared to baby boomers into order stay on carbon budget of 420 GigaTons of CO2 remaining before we hit 2 degrees Celcisu. We need to reduce excess carbon from:

To reduce GhG, the solutions must

Basically, we need to convert the creation of all industrial process to electric and then shift the source of electric from fossil fuels to renewables. The first step may appear impossible considering the amount of energy needed to manufacturer most items in our homes, however that’s what has to happen. Bill Gates details the technologies needed in his book “How to Solve the Climate Crisis.”

most pollution is from cities. By region its:

The Consequence of Climate Change

How much do we value the future? The estimates of the costs of climate change and value of the sustainability contain many uncertainties that enable doubters. The GDP, employment and wage impacts are one way (a 25% reduction in GDP at the tipping point of 3 degree Celsius), the net present value of all future cashflows. What we really value such as the lives of species, livelihood adaptation, birth rate drop aren’t easily monetized.

How central bankers view climate change? There are two types of risk

increased rate of climate and weather related events (storms, fires, floods). The underwriting risk shows that the entire livelihoods buckle as inflation adjusted losses have increased over 8x over the last few years.

The second category of costs of risk. The costs and opportunities are more apparent as the crsis worsens and impositions become more overarching:

There will be stranded assets

Calculating the Impact of Climate Change on GDP

For Carney, it is a big deal that the CEO of Shell (Sir Mark Moody-Stuart) says that the probabilities of climate change’s negative impact on humanity is 75% and acknowledges that despite that uncertainty in predicting climate change, Moody-Stuart through the course of his career made larger strategic bets with much lower probabilities…

For Carney, climate change is a ‘tragedy of the horizon.’ The worst impacts are beyond the life-span of the decision-makers of today. The horizon is beyond: the business cycle, political cycle and central bank cycles.

The benefits of mitigating greenhouse gases which stay in the atmosphere for centuries is massive, but for the people who don’t vote today, because they don’t exist yet. “Halving emissions over 30 years is easier than halving them in a decade.” (285, Value(s)) The welfare of future generations should not be discounted as heavily as the financial calculations typically demand.

The rate of adoption of new technology has three phases; 1) research and development, 2) mass adoption, 3) maturity. The rate of S-Curve over the years has been accelerating. James Watt who invested the stem and in 1769 did not see coal over take peatmoss until 120 years later in the 1900s (technically, Watt died before see that development). So, technology to tackle climate change is emerging at quicker paces. The S-Curve needs a nudge from the market as well as the public sources of capital investment.

Tragedy of the Commons

The original example is the unregulated grazing rights on the common lands of Ireland and England in the 19th century there was a negative externality in which a decision is taken which then effects others who aren’t party or even benefit from that decision, is taken. We, the consumer, and we the producer don’t pay for the CO2 emitted to produce most goods. Other examples:

Three solutions to the Tragedy of the Commons:

Carney goes on to draw the analogy that COVID is like climate change, it is a global problem. But climate change has no boundaries at all. Now, there are echoes of Bretton Woods style nationalist self-interest, huge debts and new institutions to tackle climate change:

Our political systems don’t overcome these items. True leaders are stewards of the system. Leadership is about being custodians.

Financial markets aren’t really pricing in a carbon price transaction. There is a low urgency effort that will lead to hot house earth, according to Carney. Most financial energy numbers don’t use a price test for their carbon stress test of capital investment They usually use a static price. Their prices are well below the medium to get to zero. BP has $100 per ton in its internals. Only 4% of banks and insurers think these climate risks are being priced accurately. Only 16% used a dynamic price.

Transition Pathway Initiative (TPI) is a consortium of thirteen + five asset owners/managers that are trying to better understand the transition to low-carbon impacts investment strategies. They also launched the FTSE TPI (Climate Transition Index) to articulate who is on the right side of history in Carney’s mind. Investors are shifting capital away from hydrocarbon investments incrementally suggesting that they are pricing in a transition. In other words, the markets are responding to something akin to inevitability about a low-carbon economy. But these are strategic bets, it doesn’t mean they are certain. Moody’s “recently identified sixteen sectors with $3.7 trillion in debt with the greatest exposure to transition risk” (297, Value(s)).

Citations Worth Noting for Part 2: Chapter 11: