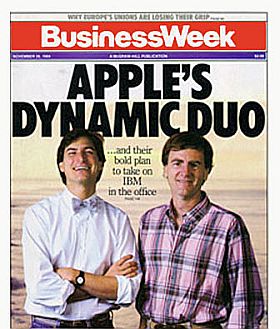 Bringing In An Outside Expert Can Be Costly:

Steve Jobs was too rough-edged to be Apple CEO so Markkula and Jobs went shopping for an alternative. They focused away from the tech sector to find a marketing genius. John Scully was an outsider who was an expert in management, and a consumer marketer who had a corporate polish. He invented the Pepsi Challenge campaign at Pepsi, and he was good at marketing, and advertising. Scully was struck by how poorly marketed computers were in the mid-1980s. Scully did not actually like computers because they seemed to be too much trouble, however Scully was enthusiastic about selling something more interesting than Pepsi Co.

Scully decided that Apple should work on the idea of ‘enriching their users lives’. Scully was good at generating PR, and excitement around Pepsi. The ability to generate a buzz about Pepsi would be replicated by Steve Jobs in the unveiling of new Apple products subsequently. Initially the two hit it off very well in their meetings about Scully joining Apple. They both admitted to be smitten with each-other over the big ideas surrounding computer technology. Jobs knew how to manipulate Scully’s insecurities to his advantage. Jobs and Scully seemed to understand each-other, and they had become friends, and emotional confidants. The problem was that most marketing people are paid posers, according to a former Apple manager. Scully actually did not care about computers but cared largely about marketing, and selling an idea to the public.

When Jobs showed Scully the Macintosh, he was more interested in Steve Jobs presentation skills than the computer itself. Scully claimed to share with Jobs goals but he was not 100% enamored with the product. Steve Jobs knew that Scully would be able to teach him the most, and Scully successfully sold Jobs the idea of his being appropriate for Apple. Jobs asked him famously: “do you want to go on the rest of your life selling sugar water, or do you want a chance to change the world.” Scully received $1,000,000 in salary, and a $1,000,000 signing bonus as the new CEO of Apple in April 1983.