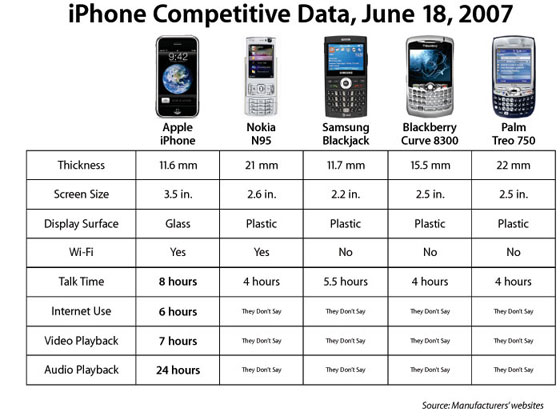 The digital camera industry was destroyed by cellphones, and Steve Jobs knew that in order to stay ahead of the wave, they would have to cover the cellphone market as well. The iPhone was born out of a concern that Nokia et al would eat Apple’s lunch by creating mobile photos that could easily play music, just as Nokia et al had crushed Kodak. Motorola was a stupid company to Jobs because the Rokr was a joke. Jobs realized that the iPod wheel was not going to dial phone numbers. Jobs was working on the iPad with the touch screen system before the birth of the iPhone. The ability to process multiple touch items was Steve Jobs’ ideas. They wanted to transfer the track pad to the computer screen. Ive never made a demonstration with other people because he know Jobs would shoot it down. The tablet development was put on hold, and shifted to the iPhone screen. Jobs split the multi touch track pads and wheel based iPhone plans. The case could not be opened, and Apple made sure that people could not access the iPhone. The iPhone was three products bundled into one: 1) internet interface, 2) mobile phone, and 3) touch controls. The iPhone was a massively successful product even though it was the most expensive phone in the world $500. Ballmer said the iPhone sucked because business people want a keyboard. Apple sold 90 million phones within months.