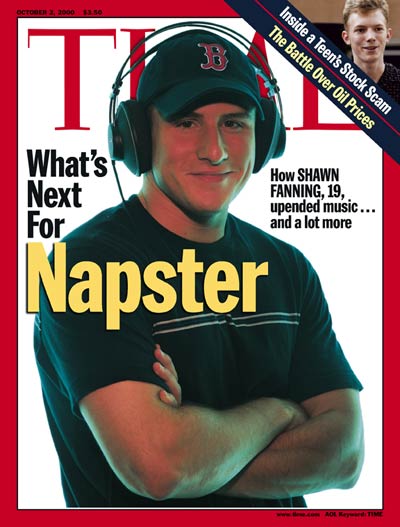 The Internet Is Made For Music:

Napster, Limewire, and other music file sharing websites allowed the illegal downloading of music on a massive scale, and a precipitous decline in sales of traditional distribution platforms for music which began dropping by 9% in 1998. The executives at the music companies were desperate to agree on a common standard for copy-right protection. If the music industry could agree to the coding of music across the industry, they might be able to get a head of the Peer-to-Peers. Sony and Universal came up with Press-Play. EMI had their own system alternative, each had a subscription based system where you would rent the music, and the two competing solutions would not license each other’s songs. The interfaces were clunky, and the services were terrible, the record companies did not get how to solve the problem. Warner/Sony wanted to close a deal with Jobs, largely because Warner/Sony did not know what to do. Steve Jobs was opposed to the theft of creative products even though he bootlegged Bob Dylan in the 1970s. If people copied Apple software, there would be no incentive for new music other than from the passion of musicians.

Creative companies never get started, and it’s wrong to steal, and it hurts your own character according to Jobs. iTunes was the alternative to the brain-dead services, iTunes was the legal alternative to P2P where everyone wins: a) users would no longer steal, b) record companies generate revenue, c) artists get paid, and d) Apple disrupts the music industry. Steve Jobs had a tough pitch with record companies because of the pricing model, but he used the fact that Apple was still only 5% of the computer market to convince them that such a deal was not have a major impact oo their bottomline. So if iTunes was destructive, it would not be quite so too damaging. Apple was a closed system, and so these Record companies could use Apple as means of controlling the MP3s.

Record companies got $0.77 of the $0.99. People wanted to own music, not rent, or subscribe to it. The subscription model did not make as much sense. Record companies had made a lot of money by having artists produce two or three good songs with 10 fillers, the iTunes store would allow users to select only the songs they liked, further upsetting Record companies. Steve Jobs’ response was that piracy had already deconstructed the album. He closed deals across the music industry which was astounding. Jobs bridged the gap between technology and art.