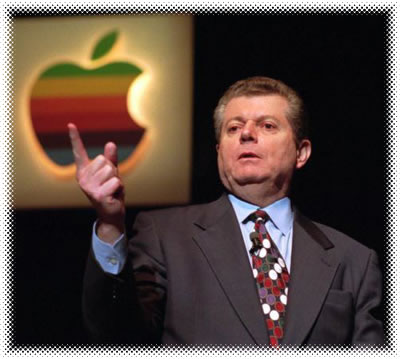 The Loser Now Will Be Soon To Win:

Jobs believed Amelio was a bozo. Gil Amelio did not actually present or sell himself particularly well, and he famously bombed on stage at MacWorld in 1996. That particular presentation was very poor and unplanned. Once back inside Apple, Jobs was too honest and spoke with one of the board members Willard who asked Jobs what he thought about Amelio. Jobs said that Amelio was not in the right job, and then added that Gil Amelio was the worst CEO ever. Famously, Gil Amelio had explained to a journalist that “Apple is like a ship, that ship is loaded with treasure, but there’s a hole in the ship. And my job is to get everyone to row in the same direction.” That lack of logic in this statement spoke to Amelio’s lack of efficiency as a leader.

Ellison tried to call for the drafting of Steve Jobs as CEO of Apple. When Amelio confronted Jobs about the possible takeover, Jobs denied any of it but refused to declare that he was not positioning himself for a takeover. Jobs loved to dish out flattery with Amelio, meanwhile Jobs was busy turning the board against Amelio, and Apple’s dire situation financially. People were leaving Apple, and thinking of leaving Apple which is never good when your people are an important asset. Amelio was fired because he was incompetent, but once Jobs was offered the CEO job, Steve Jobs moved into the interim CEO because he was still running Pixar. After years in the wilderness, Jobs was back at the top of Apple. The first thing he did there was to commit a subtle by significant vindictive act: Jobs hated the Newton personal assistant because you needed a stylus and also because the Newton was one major innovation of John Scully’s. Scully was the man who kicked Jobs out of Apple in 1985. Jobs cancelled the Newton.