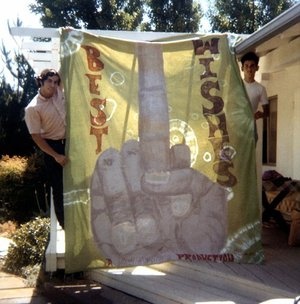 Steve Jobs and Wozniak produced a banner with a hug hand flipping the middle finger to all the seniors as the graduating classes marched past during a High School pep rally. This got Steve Jobs suspended. Steve Jobs was interested in pranking his classmates, and even put a small explosive under one of his teacher’s desk. Their most effective prank had been to scramble TV frequencies with a remote control. Wozniak and Jobs would hide in the bushes while university students were watching television.

On cue, the TV would be scrambled with a small device Woz had built, and one of the students would get up to fix it. Wozniak played around so that the student would be compelled to hold an awkward position in order to keep clear the TV signal. Wozniak’s device was highly effective in manipulating people.