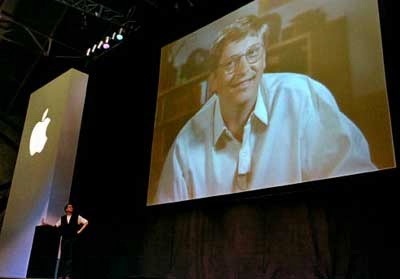 The Microsoft team members wanted to know everything about the OS operating system during their close partnership with Apple in 1983. Gates believed that GUI was the future, and he claimed that the Xerox Alto was the foundation of all personal computers so Jobs was stealing the idea anyway. By November 1983, Gates admitted that there were plans to create an Microsoft operating system to be launched on all IBMs and clones.

The product was called Windows. Steve Jobs was furious. Part of their partnership in 1982 onwards was that Microsoft would not develop any programs for IBM until a year after the MacIntosh launch in January 1983. Unfortunately, Apple did not launch the Macintosh until January, 1984 so Gates was within his rights to proceed with licensing to IBM. Gates came down to Apple, and Jobs assailed Gates “You’re ripping us off! We trusted you.” Bill Gates put it well, “We both had this neighbour named Xerox, and I broke into to house to steal the TV but found that you had already been there.” When Gates showed Jobs what he had developed for Windows, Jobs did not complain that it was stealing because he told Gates right to his face that Windows was a “piece of shit.” Jobs was almost crying about it, and went on a long walk in November 1983. Apple and Microsoft were now in serious conflict at this point. Windows was not launched until 1985 because it was not very good, but Microsoft made Windows better over time, and by 1995, it was dominant. Until the return of Jobs in 1997, there was a dark period of Microsoft dominance in the computer industry according to Jobs. The open system approach that Microsoft adopted by working with multiple hardware partners proved better because it allowed Microsoft to get on to multiple platforms for scalability. Meanwhile, other Apple developers began working with clones as well.

Adele Goldberg showed Jobs the Xerox GUI, but she was angry that Xerox was allowing Jobs to see ‘everything.’ She understood that Xerox had “grabbed defeat from the jaws of success” according to Jobs, by giving him access to their R&D work in exchange for shares in Apple. Without Jobs’ visit to Xerox PARC, the Macintosh, and Lisa would not have had the GUI, and Bill Gates might not have subsequently revolutionized computers with Windows.