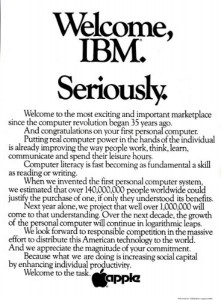 The Believe In A Closed System & Product Control:

The architectural structure and software had to be tightly linked according to Jobs. Functionality would be sacrificed if one were to allow for multiple software producers. While Microsoft could be used on any hardware, Jobs refused to have Apple computers fragmented by the work of partners who did not follow Apple’s rules. On the customer level, Jobs refused to allow users to alter the product, pitching the idea that Apple products were more user friendly (which they were). He did not want to give users control. The closed system is useful for the iPhone era but not from 1981 until the mid to late 1990s with IBM (Big Blue) and Microsoft working across platforms; Apple’s competitive advantage in the PC market eroded dramatically in the early to mid 1980s. By scaling with multiple hardware platforms such as IBM PCs, Dell, and Compaq, software developers had an open-source alternative to the closed Apple system. Bill Gates realised this closed system problem in the early 80s and exploited it. Jobs wanted end-to-end control so that software developers had to buy into the Apple system, however, critical mass was essential for that to work. In 1982, Jobs wanted the industry standard to be Apple software + hardware, he did not want sales cannibalization that comes with allowing other computers to use the Apple Operating System on their computers. But for developers, the labour required to work within Apple’s ecosystem was prohibitive compared to the gains made by working on an open-source PC world. As a result, in 1997, Jobs admitted that they had been overly proprietary, and thus failed to see how that was hurting their marketability from 1984-1997. In the 2000s, the closed system had the advantage as Apple become a premium/closed brand through carefully working with 3rd parties.