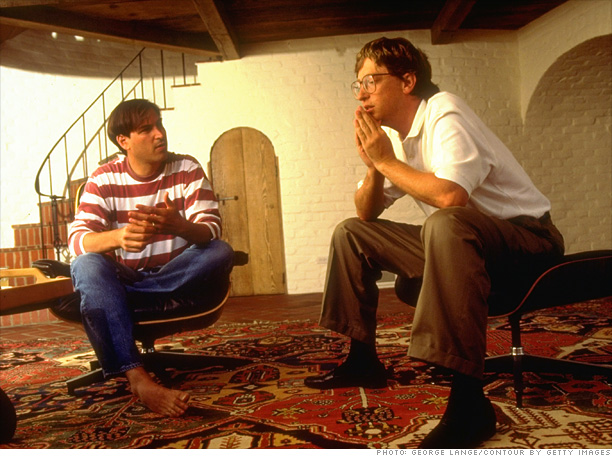 Eras Are Defined By Partnerships & Rivalry – Gates Versus Jobs Round 1:

Two high energy college drops ended up shaping the commercial PC market. Bill Gates created a program for scheduling classes, and a car counting program while in high school. Gates was skilled at being logical, practical, and analytical while Jobs was design friendly, and less disciplined. Gates was methodical in his business style. Bill Gates was humane but could not make eye contact. Gates was fascinated by Jobs’ mesmerizing persona but saw Jobs as rude and cruel. Jobs has always maintained that Gates should have dropped acid to open up his mind to creativity. The only thing Gates was open to was licensing Microsoft to Apple but not on an exclusive basis. Jobs long believed that Gates was not a creative person, and that Gates ripped off other people’s ideas or at least did not have original ideas. Meanwhile, Gates derisively called Macintosh “S.A.N.D.” ie. Steve’s Amazing New Device. Gates mentions that he did no like Jobs’ management style, as Steve had a tendency to call his own co-workers idiots on a regular basis.

The rivalry was also beyond the personal. In 1982, Apple’s sales were $1 billion, while Microsoft made $23 million. Jobs had an attitude with Gates that suggested Gates should be honoured to work Jobs, it was insulting. From Jobs’ perspective, Gates did not understand the elegance of the Macintosh. There were 14 people working on the Macintosh while Microsoft programmers created applications that had 20 people working on programs to Mac.  Their rivalry was deep and probably spurred innovation forward for that reason.